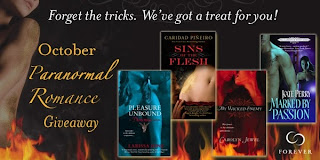 To celebrate Halloween and the start of autumn, Hatchette is sponsoring this amazing giveaway of these four books:

In a place where ecstasy can cost you your life . . .

She's a demon-slayer who hungers for sensual pleasure-but fears it will always be denied her. Until Tayla Mancuso lands in a hospital run by demons in disguise, and the head doctor, Eidolon, makes her body burn with unslakable desire. But to prove her ultimate loyalty to her peers, she must betray the surgeon who saved her life.

Two lovers will dare to risk all.

Eidolon cannot resist this fiery, dangerous woman who fills him with both rage and passion. Not only is she his avowed enemy, but she could very well be the hunter who has been preying upon his people. Torn between his need for the truth and his quest to find his perfect mate before a horrific transformation claims him forever, Eidolon will dare the unthinkable-and let Tayla possess him, body and soul . . .

SINS OF THE FLESH

Caterina Shaw's days are numbered. Her only chance for survival is a highly experimental gene treatment-a risk she willingly takes. But now Caterina barely recognizes herself. She has new, terrifying powers, an exotic, arresting body-and she's been accused of a savage murder, sending her on the run.

Mick Carrera is a mercenary and an expert at capturing elusive, clever prey. Yet the woman he's hunting down is far from the vicious killer he's been told to expect: Caterina is wounded, vulnerable, and a startling mystery of medical science. Even more, she's a beautiful woman whose innocent sensuality tempts Mick to show her exactly how thrilling pleasure can be. The heat that builds between them is irresistible, but surrendering to it could kill them both . . . for a dangerous group is plotting its next move using Caterina as its deadly pawn.


A desire that can't be controlled...Carson Philips is a witch on the run. For years, the notorious mage, Alvaro Magellan, has held her as his psychological prisoner. But once Carson gets a glimpse of the true extent of his evil, she flees Magellan's mansion--stealing a stone talisman of unimaginable power on the way. Her only hope for survival is a demon who ignites a voracious hunger in her she can't deny, a longing she can't resist...

A hunger that can't be sated...Nikodemus is a warlord with a mission: Kill Magellan and his green-eyed witch at any cost. But when he meets the desperate Carson, the pull of her magic takes his breathe away. He's not sure he can trust this tantalizing woman--she is his enemy--and less sure he can keep his hands off her. But Magellan will stop at nothing to reclaim what belongs to him. Can Nikodemus stop him before his desire for Carson destroys them both?

Gabrielle Sansouci Chin is turned for a loop when she receives the ancient scroll that she was marked to protect. Her possession only means one thing...her father is dead. Gabe has no idea how she is going to balance her new responsibilities as a Guardian being a painter by day and a bartender by night. Having just been contracted for her new "Enter the Light" series, Gabe tries to handle it all. But it seems like her luck has run dry when she's ill trained to take her proper place as guardian, having a dry spell at painting, and for some reason can't help but fall for Rhys Llewellyn, the sexy Brit who offers his help in more ways than one.

CONTEST DETAILS:
Although each of the winners will receive all 4 books, please share which of the four you're most drawn to (or will read first) and why.

Rules:
1. Please include your email address, so that I can contact you if you win. No email address, no entry.
2. You must be a follower to join the contest.

The contest is limited to US and Canada only. No P.O. boxes. The contest ends at noon on November 15, 2010.

Thank you so much to Anna and Hatchette Book Group for sponsoring this giveaway!
Posted by Gaby317 at 10:30 PM 10 comments:

Friday 56: Week 57 Outside the Ordinary World by Dori Ostermiller

Rules:
* Grab the book nearest you. Right now.
* Turn to page 56.
* Find the fifth sentence.
* Post that sentence (plus one or two others if you like) along with these instructions on your blog or (if you do not have your own blog) in the comments section of this blog.
*Post a link along with your post back to this blog and to Storytime with Tonya and Friends at http://storytimewithtonya.blogspot.com/
* Don't dig for your favorite book, the coolest, the most intellectual. Use the CLOSEST.

Outside the Ordinary World

Here's the blurb:
"Did it feel like you had a choice? Or were you driven by forces beyond your control?"

Sylvia Sandon always swore she wouldn't become her mother.  But one August morning she finds herself walking the same path as the fervently religious yet faithless Elaine. . . into an affair she feels powerless to resist.

Against the backdrop of California brush fires in the 1970s, twelve-year-old Sylvia had agreed to hold a secret that would devour her family's dream of happiness.  Now struggling to create a better life in small-town New England, Sylvia nonetheless feels caught in the coils of history:  she confronts the embers of her dying marriage, the all-consuming needs of her two daughters and her faltering artistic career.  Then Tai Rosen -- the father of a student -- ignites an unexpected passion and a familiar betrayal that could illuminated the past, even as it jeopardizes everything dear.

Dad held a letter, which he slapped onto the tile."

About the Author:
Dori Ostermiller left her native California at twenty-four to complete an MFA in writing at the University of Massachusetts.  She is the recipient of a Massachusetts Cultural Council Artist's Grant, and the founder and director of Writers in Progress, a literary arts center in the Pioneer Valley of western Massachusetts. She currently lives with her husband and daughters in Northampton, where she is at work on her second novel.
Posted by Gaby317 at 4:53 PM No comments: