I just wanted to give a shout out for The Tiny Book of Tiny Stories 2.  I was fortunate to read and review the first volume when it came out and am glad to report that this next book is just as enchanting. The Tiny Book is a collection of illustrations and small statements, so that you find a tiny poem/story for every 2 pages.
The book is a collaboration of different artists - "HitRecord" curates submissions from the public to come up with a careful selection that combines humor, hope and just a little darkness.  It's the sort of book that I would have loved as a teenager and still enjoy now, many many years later.  The book's cover says: "The universe is not made of atoms; it's made of tiny stories."


Here's one of the early stories and one of my favorites - it sets the tone of the book. 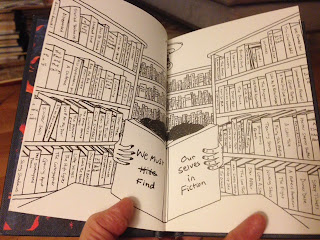 There are stories of love (some sad and some happy), I prefer the sad ones and sort of wonder which ones appeal to other readers.  There are some that are humorous, that make you take a look at the world around you or poke fun at language.  For instance, here's one of my other favorites which refers to loopholes. : ) 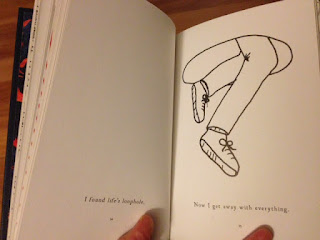 The book itself is tiny, easy to carry with you. It's beautifully done with nice thick paper.  It's a good book to keep and/or to give to someone with a love of language and a sense of humor. I recommend it highly!

About the Author:
HitRECord founder and director Joseph Gordon-Levitt’s acting career has managed to garner a massive popular appeal while maintaining a widely respected artistic integrity. He recently starred in Christopher Nolan’s Academy Award-nominated Inception and received Golden Globe, Independent Spirit and People’s Choice award nominations for his performance in (500) Days of Summer. Currently earning rave reviews for his performance in 50/50, also starring Seth Rogen, his upcoming films include David Koepp actioner Premium Rush and Rian Johnson’s sci-fi thriller Looper, with Bruce Willis. He is currently in production on The Dark Knight Rises, the third installment in Christopher Nolan’s Batman trilogy, and will next begin work opposite Daniel Day Lewis in Steven Spielberg’s Abraham Lincoln biopic, Lincoln.
Posted by Gaby317 at 10:51 PM No comments: