This year's ThrillerFest officially began on Wednesday with the two days of intense seminars and talks by some of the top writers attended by a generous mix of International Thriller Writers, published and unpublished fiction writers, editors, agents, publicists, and fans of thriller and mystery writing.  While I'll spend much more time writing about what I learned at CraftFest over several posts next week, I did want to share a few of the talks to give you a flavor of the conference. 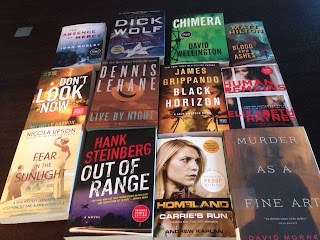 The conference opened with a warm and cheery welcome by ITW Co-President Kathleen Antrim, ITW VP for National Events D.L. Wilson and Chair of ITW's Marketing Committee Jon Land.   The welcome set the tone and emphasized just how different ITW's ThrillerFest is from most other book events in the way that the participants open up and learn from each other.   It's a unique opportunity to meet, network with, and actually befriend fellow writers.  Even the most famous and successful writers come to ITF to meet with other lovers of the genre and at ThrillerFest they're accessible in ways that would be near impossible in other venues.

The first CraftFest class that I attended was standing room only.  Steve Berry gave his regular talk on The 6 C's of Story Structure.  I promise to post more on this next week as well as on the other classes that stuck with me.

I've got to sign off - heading to the last day of ThrillerFest to attend the breakfast with Silver Bullet Award recipient Steve Berry and to learn about the Debut Author Class of 2013.  More later!