It's been a while since I've written and I'd like to apologize. I'd been traveling much more than usual and though I've been reading,  the traveling, visitors from overseas, some internet connectivity issues have resulted in this silence.

I'd like to share my World Book Night experience and to encourage anyone who is considering signing up for it next year to do so. I was lucky to be able to give away 20 copies of Marcus Zusak's The Book Thief.  I had initially intended to spend the day in NYC - visiting Sunset Park and Manhattan, traveling around without a specific base.   But my relatives decided to visit the East Coast from the Philippines.  My favorite aunt, her daughter, son-in-law and grandson were in Boston & Gloucester, MA for 10 days so I made 2 trips to Boston to see them.  I spent World Book Night in Gloucester & Boston. 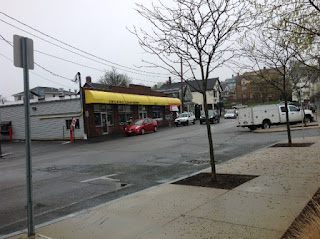 It was a bit tricky trying to figure out who might be a light reader and to approach them with the offer of a free and excellent read.   My first two tries were at the Morning Glory Diner in Gloucester.  An elderly woman eating alone at the counter lit up with the gift of a free book and a good read to celebrate Shakespeare's birthday & World Book Night.  Our harried waitress was less excited at the prospect although she tucked the book away for later.  I couldn't stay for breakfast and was dropped off at the Gloucester train depot.  I waited for the train at Jim's Bagel Shoppe, tempted by the baked goods.  I watched the busy morning service and offered the efficient and friendly young girl behind the counter a really wonderful read to celebrate World Book Night.  She held the book in her hand and said, "Oh, I love a good book!"  : ) 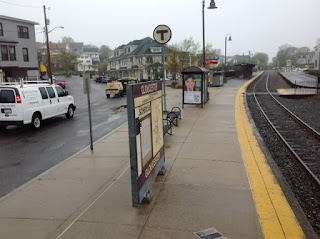 I headed to the train platform and tried to come up with a better strategy.  A woman smiled at my bag of books and World Book Night pin.  I immediately started talking about World Book Night and she wrote down that she couldn't hear.  I took out a book and showed it to her and when she wrote down the title, I offered it to her.  And then wrote her a note about World Book Night just as she was writing me a huge THANK YOU!   I suspect that she is a reader as well, so I tried to find a non-reader for my next recipient. 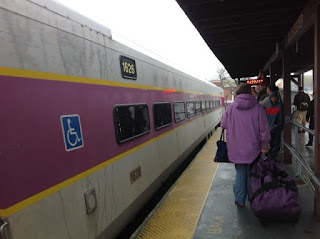 I spent much of the hour long train ride to Boston thinking of how to approach the ticket collector, but couldn't find her when we finally reached North Station.   I walked back into the different compartments and got a few suspicious looks.  At the women's bathroom, this youngish woman was refilling the soap dispensers.  I asked her if she'd read a good book lately and she was quite puzzled but polite when she said no.  I gave her a copy of The Book Thief and explained that it was a wonderful read - a bit tough in the beginning but to keep reading and it is amazing. And that a middle school kid would enjoy it as well.  She seemed to like the idea of sharing the book with a kid and promised to read the book. 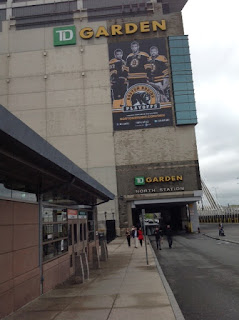 I walked around the area and found a small Holiday Inn Express nearby.  Figuring that the friendly man at reception could always use a good read, I asked if he'd read anything good lately.  As he said no to my strange question, I offered him a copy of The Book Thief.  I explained about World Book Night and that the book was a wonderful read. It has a tough beginning but to keep at it.  He seemed delighted and my second real successful introduction.  Buoyed up with these recent successes, I approached a few cab drivers and a parking garage attendant.   None of them were interested in a good read.  The parking attendant was in the middle of a good book - and didn't seem interested in someone else (like me!) picking out his next read.  And the cab drivers just weren't interested.

So, I headed back to the South End with my list of places to visit.  I dropped off a book at Lasker's, a small neighborhood store, where the owner works 7 days a week.  He was glad to receive the book and didn't quite believe that it was offered for free. This lead us to a discussion of what we really loved about America.  We'd both emigrated to the US and find that these acts of private generosity are part of what we love about America.

I wasn't able to go to all the spots I'd initially planned (locksmith, small pizza parlor, neighborhood bank, etc.) in the South End. Instead, I walked down Tremont Street in the South End and stopped into the small businesses.  I found a young man stocking bottles in the wine store who was happy to receive a good book to read, a woman who promised to share the book with others,  several women manicurists who were very happy to have a book to share with their middle school children.  A number of people refused the offer of a book - quite a few didn't read in English and some just thought I must be a bit strange. 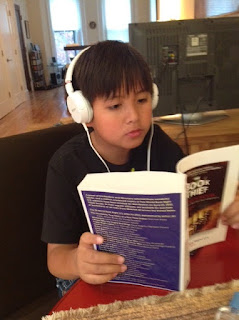 My nephew Pancho was visiting from the Philippines and though he's a smart 12-year old, he doesn't read all that much.  His parents aren't readers and Pancho is busy with school, tennis, his friends, etc.  I'd made the mistake of handing him a stack of books when I saw them earlier in the week.  Apparently, if he has unread books, his parents curtail his tv time and his time with friends until he's caught up with his reading.  He finds books a bit stressful and was quite clear that he wasn't interested in receiving another book. He explained this to me early the morning of April 23, when we were all still at Gloucester.  I figured that if Pancho didn't want a copy of The Book Thief, I might persuade his mother to read it and to share it with him at a later date.   I gave away 19 copies of the book and kept one for Pancho or his mother.   I saw them that evening and was telling everyone about my day and World Book Night.  Pancho was listening quite intently and asked me if I still had a copy of The Book Thief.  This is a picture of Pancho reading The Book Thief.