I went back to my neighborhood Weight Watchers today after having avoided meeting and tracking for months.  I won't bore everyone with what and why I'd "lapsed".  I had dreaded finding out just how much I'd gained but it was good to be part of the meeting, to hear other people's stories and to feel that I'm taking control over my body and fitness again.

And today's meeting was great. It was led by this young woman with an engineering background and who now does improv as well as her work at Weight Watchers and at a hospital.  There was a couple who had long been an example of how behavior modification and how the WW program works.  They had been under considerable stress with their children and their worry and the close confines of this particularly snowy winter has led to some weight gain.

There were a few of us who had been successful on the program but had strayed and we were back again for our first meeting in a while.  There's a new system now for the first 2 weeks:
"Simple Start" which is a combination of the less points oriented system with a choice of possible meals.  The skinny - heavy on the power foods regardless of volume - and a controlled amount of treats each day.  Unlike the usual program, the Simple Start allows for 9 points for treats each day but if you don't use the points, you can't carry them over to the next day.

I've been able to follow the program today and am using a new food scale to help me keep track of my food. The scale on the left is my trusted OXO scale and the one on the right is the new smaller, lighter Mira. 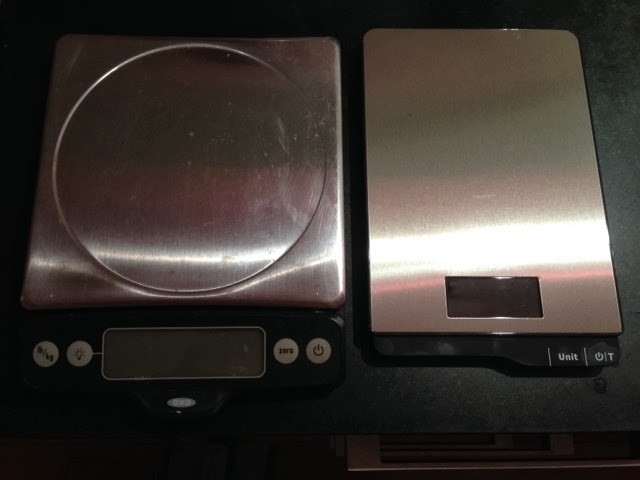 I'll write back about my progress - hoping that you're all staying well and warm!
Posted by Gaby317 at 6:46 PM No comments:

Mr. Owita's Guide to Gardening: How I Learned the Unexpected Joy of a Green Thumb and an Open Heart by Carol Wall

The blurb:
Carol Wall, a white woman living in a lily-white neighborhood in Middle America, is at a crossroads in her life. Her children are grown; she has successfully overcome illness; her beloved parents are getting older.  One day she notices a dark-skinned African man tending her neighbor's yard.  His name is Giles Owita.  He bags groceries at the supermarket. He comes from Kenya.  And he's very good at gardening.

Before long, Giles is transforming not only Carol's yard, but also her life. Though they are seemingly quite different, a caring bond begins to grow between them.  But they both hold long-buried secrets that, when revealed, will cement their friendship forever.

Review:
Mister Owita's Guide to Guardening: How I l Learned the Unexpected Joy of a Green Thumb and an Open Heart is a beautifully written account of the friendship that develops between two happily married people from very different lives and backgrounds. Carol Wall is a well loved suburban high school teacher married to a successful lawyer. She's a mother, grandmother, and loving daughter. After her children have grown up and left the home and her parents are moving from their home to an assisted living facility, she starts looking at the outside view of her home. She'd spent years focused on the inside and decides to engage her neighbor's gardener to help improve her own.

Instead of a phone call, Carol Wall receives a well written and sensitive letter from Mr. Owita where he introduces himself, describes his impression of her garden and young dog. When Carol Wall and Mr. Owita do meet, they connect and in their slow way, become friends. Their friendship stands out in that they are able to talk about things, big and small, and somehow understand each other - all without becoming familiar. It's a story that is easy to imagine as it invokes the closeness and sympathy that we sometimes find in other people - and the excitement and joy that we have in coming across such friendships.

About the Author:
Carol Wall is a writer whose essays and articles have appeared over many years in Southern Living magazine and The Atlanta Journal-Constitution.  She lives on a tree-lined street in the heart of Middle America.