If you live in NYC and have the time and inclination to commit to 50 hours of pro bono service, I recommend signing up for the Bridge the Gap seminars offered by the NY State Courts.  The lectures are for both newly admitted and experienced attorneys and give an overview and practical training over the course of three days.

I attended the Spring lectures with my friend Margaret but was late to perform my pro bono work.  Since the start of September, I've been volunteering at the No-Fault Divorce Clinic and at Housing Court in Brooklyn. 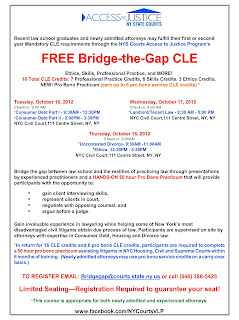 If you aren't ready to commit to pro bono work,  you might be interested in signing up with Lawline for their CLE subscription.  Lawline is offering a 1-year CLE package for $299.   If you're interested, head to www.lawline.com/ny299 or call 1-866-240-9077.  This particular package expires on 10/31.  I've listened to a several Lawline lectures online. They're undeniably convenient as you can listen almost anywhere and anytime.  The lectures vary in their usefulness, I prefer the practical lectures and gravitate towards those covering real estate practice and tax practice.

Another good source for CLE is your local bar association.  AABANY, the Asian American Bar Association of New York,  organizes practical and interesting CLE lectures in the area of real estate practice.   Margaret Ling of the Real Estate Practice Group develops and organizes particularly effective and valuable CLEs.   The AABANY CLEs are open to non-members for a marginal fee.

Can you recommend a solid CLE provider?  Where do you go for your CLE needs?
Posted by Gaby317 at 7:28 PM 2 comments:

Rachel and Alice are an extremely rare kind of identical twins -- so identical that even their aunt and uncle, whom they've lived with since their parents passed away, can't tell them apart.  But the sisters are connected in a way that goes well beyond their surfaces:  when one experiences pain, the other exhibits the exact same signs of distress.  So when one twin mysteriously disappears, the other immediately knows something is wrong -- especially when she starts experiencing serious physical traumas, despite the fact that nobody has touched her.  As the search commences to find her sister, the twin left behind must rely on their intense bond to uncover the truth.  But is there anyone around her she can trust, when everyone could be a suspect?  And ultimately, can she even trust herself?

In Beautiful Lies we read about identical twins, Rachel and Alice who share a rare link.  Not only are they identical but they shared the same placenta when in utero.  Since their childhood, they've literally felt their twin's pain and their bodies reflect the hurt and damage that their twin suffers. While the twins look exactly alike, their temperaments are distinctly different, possibly a reflection of the trauma that they suffered during the car crash that killed their parents.  Alice was conscious of the entire trauma while Rachel had been rendered unconscious.  Now, in their teens, Alice is the gifted artist, the emotional, troublemaker, and less stable twin.  Rachel is more solid both in school, in her friendships, in dealing with their aunt and uncle who serve as their guardians, and in accepting "reality".

In early October, Alice and Rachel spend the evening with friends in the local carnival.   Alice skips out on the group but never arrives home.  Rachel is certain that something has happened to her sister but after Alice's many escapades it is difficult to convince her family and the police that there is something wrong.  As Rachel desperately tries to find her twin, we begin to wonder who to trust and what is true.

I loved Beautiful Lies - it begins as a well written, engrossing Young Adult novel.  As the tension mounts and the novel progresses, I began to realize just how carefully crafted and masterfully written it is.  Some novels have twists and turns but in Beautiful Lies, Jessica Warman delivers a rare gift of a mystery.

About the Author:
Learn more about Jessica Warman at http://jessicawarman.com
Posted by Gaby317 at 1:00 AM 1 comment:

Accessible and engrossing, Tumbleweeds  tells a love triangle of sorts involving Cathy, John and Trey.  Each of them are standouts in their own right - good looking, athletic, smart, and wildly popular.  John and Trey had been best friends and leaders even as children.  When Cathy moved to Kersey, they took her into their group and forged a special bond that stretched and held through high school and the complicated ups and downs of teenage love.

John and Trey are football stars in high school.  Cathy is an intellectual who makes her own way.  When a mistake in judgment leads to irrevocable damage and tragedy, the three friends separate.  When Trey returns nearly 25 years later, the reunion threatens to bring into the open secrets and Cathy and John have long kept hidden.   As closely held secrets come to the surface, so does the threat of violence and betrayal.

Leila Meacham draws you into the lives of Cathy, John and Trey.  While I sometimes could predict the characters' dilemmas,  I still wanted to know how they resolved their problems.  Much like a good soap or drama, Tumbleweeds kept me engrossed until its satisfying end.

About the Author:
Leila Meacham is a writer and former teacher who lives in San Antonio, Texas. She is the author of the bestselling novel Roses.
Posted by Gaby317 at 12:01 AM No comments:

John Saturnall is a young boy growing up fatherless in a small village in England during the early 17th century.  While there are whispers that John's mother is a witch, her neighbors trust in her knowledge of plants, herbs, and medicines. It's from his mother and her special book that John to read and to identify and use  plants, herbs, and spices.   As the religious wars grow heated, a new pastor leads the villagers in a hunt for the "witch".   With their home destroyed, John and his mother hide in the woods as winter approaches.  After John's mother dies, he is found sent to Buckland Manor house, where his mother had worked years before.

Starved, filthy, and desperate, John knows that Buckland Manor is his last hope.  One of the younger kitchen staff enlists John's help with a job and John finds his way to the kitchens.  There is a moment in the book, during John's first visit to the kitchens where he stuns the cooks with his ability to identify the spices and flavors in a special dish.  This feat catches the attention of the Head of the Kitchens and wins him a place in Buckland Manor.  It's in these kitchens at Buckland Manor that John finds a home.   As he advances and grows into his gift, young John's cooking challenges are legendary.  John cooks for the King of England.  When Lady Lucretia enters into a fast to protest an unwanted engagement,  John is tasked with tempting Lady Lucretia to eat again.  And when Civil War erupts,  Lady Lucretia and John work to ensure the manor's survival.

John Saturnall's Feast started slow but it drew me in once John arrived at Buckland Manor.   John's friendship with the young kitchen boy, Philip,  marks a turning point in John's life and in the novel.  There is the added complication of John's love for Lady Lucretia and his heated encounters with her fiance.  John and his story grow, become special, and make for an absorbing read.

About the Author:
Lawrence Norfolk is the author of the critically acclaimed novels Lempeire's Dictionary, The Pope's Rhinocerous, and In the Shape of a Boar.  Lempriere's Dictionary was named a New York Times Notable
Posted by Gaby317 at 1:30 AM No comments: