Watching the Dark: An Inspector Banks novel by Peter Robinson

I caught DCI Banks on PBS/WLIW21 last Monday - the same day that Peter Robinson's  latest DCI Banks novel was released.  I hadn't read any of the earlier novels, so watching the pilot episode seemed like a nice way to celebrate and savor DCI Bank mysteries.

The blurb:
When Detective Inspector Bill Quinn is found murdered on the tranquil grounds of the St. Peter's Police Treatment Centre, and compromising photographs are discovered in his room, Detective Inspector Alan Banks is well aware that he must handle the highly sensitive -- and dangerously explosive investigation with utmost discretion.  Because the case may involve police corruption, an officer from Professional Standards, Inspector Joanna Passero, is assigned to work with Banks.  But the relationship is far from smooth, and Banks soon finds himself and his methods under uncomfortable scrutiny.

Banks discovers that Quinn's murder may be linked to a cold case involving a young English girl named Rachel Hewitt who disappeared in Tallinn, Estonia, six years earlier.  A seasoned detective who follows the evidence and his own instincts, Banks is sure that finding the truth about Rachel will lead to Reid's killer.  As he follows elusive leads in the dark, cobbled alleys of Tallinn's Old Town, it soon becomes clear that someone doesn't want the past stirred up.

Back in Eastvale, D.I. Annie Cabbot follows her own leads, clues that lead her into the heart of a migrant labor scam involving a corrupt bureaucrat and a loan shark who feeds on the poor.  As the evidence begins to mount in both Tallin and Eastvale, Banks sees that the crimes are linked in more ways than he imagined, and that solving them may put even more lives in jeopardy, including his own.

Review:
I'm fond of detective novels and British police procedurals are among my favorites.  I've been trying to figure out why I find them so delightful, how they differ from American detective novels.  While I'd read one of Peter Robinson's stand alone novels, I wasn't familiar with his Inspector Banks series.  I thoroughly enjoyed  Watching the Dark.  It's strong as a novel in its own right and I'm now interested in reading the earlier novels in the series.

When Watching the Dark opens at St. Peter's Police Treatment Centre, a luxuriously maintained nonprofit that gives injured and recovering detectives a serene and safe place to recuperate, to slowly prepare for a return to their work,  I was really interested in the Treatment Centre and the fact that they had a nonprofit dedicated to give police officers the best care and luxurious spa like surroundings.  It's something I wish we had here and in the midst of the budget cuts, higher taxes, etc. I can't help but wish for the resources such.

Inspector Banks is consistently polite, determined, slightly flawed, all of which makes him a fun character to read about.  Peter Robinson adds to the mix the required presence of the beautiful Inspector Joanna Passero of Professional Standards which puts Inspector Banks ill at ease. He's attracted to her, resentful and wary of Professional Standards both for himself and for the victim Quinn. Come to think of it, Lee Child's Jack Reacher and John Puller, David Baldacci's hero in The Forgotten, are the only two of the internal investigators that I sympathize with.  In most detective and police novels, the IA officers are fare from the heroes.

Banks and Passero figure out a complex web of crime over several jurisdictions and they do it in a credible, authentic way.  I'm still trying to figure out how Peter Robinson made  Banks so distinctive without giving him a larger than life personality.  Bank's s detective skills, professionalism and recklessness when in pursuit ensure that the story moves at an engrossing speed while Banks' understated personality of politeness, loyalty and sensitivity endear him so that I felt that I knew him quite early in the novel.  I quickly got invested in Banks' success and in the success of his colleagues, especially that of Anne Cabbot, formerly of Professional Standards.   I very much enjoyed Watching the Dark and highly recommend it!

About the Author:
Peter Robinson's award-winning Inspector Banks novels have been named a "Best Book of the Year" by Publishers Weekly, a "Notable Book" by the New York Times, and a "Page Turner of the Week" by People.  Robinson was born and brought up in Yorkshire, and now divides his time between North America and the UK.

It's been a while and I'd like to apologize for my absence.  With such a long interval, I'd been worried about what to write about.  I'd read many good books over this time and I'd like to work backwards and mention a good number of them and I will do so.
: )

There's been plenty going on in the other aspects of my life as well.  It has been many many months since I've written about fitness, dieting or weight loss.  I'll admit it's largely because I hadn't been very successful or determined in this area and I'd been avoiding thinking about it.  I did join Weight Watchers some months ago, and while there have been ups and downs in my compliance,  I'm starting to settle into it and rediscovering healthy habits that I'd somehow misplaced over the years.

When I say settle into it, I really mean that I've become scientific and careful with measuring my food and portion control.   I remember when I'd first moved to Philadelphia for grad school,  my friends and I would buy takeout food and could eat one portion over three meals.  By the end of the year, I could finish off a takeout portion with little hesitation.  This sort of repeated itself with other types of food until I ate myself into a bit of a mess. 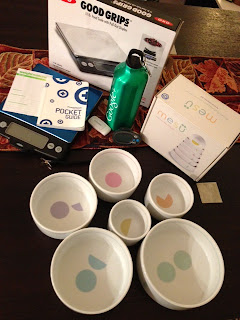 So, as I've been making an effort to be mindful about what I eat and how much I eat,  I did want to share some portion control tools and treats I've come across.

(1)  digital scale
Look for one with a tare function and that weighs in both grams and ounces as this makes it much easier to weigh what you're preparing and eating.  You want to be able to weigh raw food and cooked easily.  I have a friend who is following the Dr. Cohen diet and she reports that they're instructed to weigh their meat and fish raw, so a tare function makes it much easier.

After reading the May 2012 WSJ review of digital scales, I settled on an OXO Good Grips scale with pull-out display.  It took me a month to actually use it but now I use it daily.  This particular scale's pull-out display has come in handy when I weigh cooked food - I can put the plate on the scale and then add the cooked food and still adjust my portion before I eat it!  This allows me to stay within my "points" allowance.

If you're following the Weight Watcher's program, you might want to purchase your scale from WW directly as their scale also prompts with the WW points for most food items.  I love tools that genuinely make it easier to keep on track!

(2)  mesu bowls or portionware tools
I'd come across the ceramic mesu bowls a few years ago. I hadn't used them in part because I'd purchased them just before they stopped production. I was worried that if I broke a bowl I wouldn't be able to replace them!  But as the creator has come up with a plastic version (with lids) and because I now realize how silly I was being, I keep the bowls on my kitchen counter so I can easily measure food portions.  I use the 1/4 cup container for the decadent treats and have been able to cut down my consumption of rice by using a 3/4 cup instead of 1 cup.  I found that I didn't notice the difference in amount.  If I hadn't measured the rice, I fear that I'd have eaten a cup and a half or two without paying attention. I now try to use the larger bowls for fruits and vegetables instead.

3)  pedometer and/or WW Activelink monitor
Just knowing that I'm tracking my activity makes me more conscious of how much I move around.  I try to make a minimum number of steps (or WW points) each day and it helps to know how many steps I actually took over a 7 day period.  There are days when I'm very successful and days when I'm far less so, I'm trying to reduce the gap and to make up for the sedentary days.

4) water bottle
I've noticed that I do drink much more water when I have it readily available.  Even just going out on the weekend, I was able to refill the bottle twice while doing errands on Sunday.  I'm trying to drink 64 oz a day.