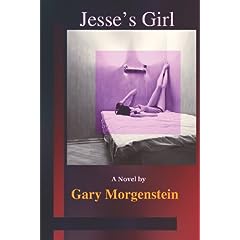 Review of Jesse's Girl by Gary Morgenstein
Synopsis:
Teddy Mentor is woken up in the middle of the night by a call from the Montana wilderness program informing him that his 16 year old adopted son, Jesse,  has run away.   Jesse had just begun the court mandated substance abuse program and no one knows where he might have gone.
Mentor has his own problems.   Divorced and widowed by Jesse's mother, Mentor is barely getting by in his PR job in NY.   But Mentor leaves his Brooklyn apartment and heads to Montana to find Jesse.  Checking all leads, skulking after drug dealers, getting thrown in jail, and constantly searching, Mentor eventually runs into Jesse at an isolated bus station.  In an effort to bond with his son, Mentor agrees to drive Jesse to meet a girl in Kentucky.    Jesse's girl is in an abusive relationship and somehow Mentor finds himself on the run with Jesse and Theresa.
Review:
The strength and complexity of parental love was one of the dominant themes in Jesse's Girl. While I'm not knowledgeable about adoption, addiction or spousal abuse, all of which permeate and shape the story, but I was engrossed by how these complex issues drove the characters.  I wasn't drawn to any of the main characters and was frustrated by Jesse, but I found myself involved and interested in their shared journey.  While it differed from my usual read, I found  Jesse's Girl  engrossing, difficult to put down.
This was my first Gary Morgenstein novel, and hadn't known what to expect.  The author and his main character live in my neighborhood in Brooklyn, and this made the work of particular personal interest as well.   The strength of his writing and narrative encourage me to look for his other books.
Warning:  The book contains adult subject matter and strong language.
Publisher: CreateSpace (March 13, 2009), 340 pages.
Courtesy of Bostick Communications.
Thank you, Bostick Communications and Gary Morgenstein for this opportunity!
Posted by Gaby317 at 4:28 PM