The Inconvenient Adventures of Uncle Chestnut: based on the Life and Works of G.K. Chesterton by Paul Nowak 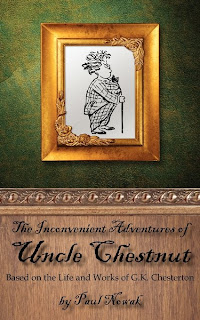 Interview with Paul Nowak, author of The Inconvenient Adventures of Uncle Chestnut: based on the Life and Works of G.K. Chesterton

It is my pleasure to introduce Paul Nowak, the author of a new series of children's books with G.K. Chesterton, otherwise known as "Uncle Chestnut".

Q: What drew you to G.K. Chesterton? How did you decide to write this series?

A: I started reading Chesterton's works just before college, and found in incredible how relevant his writing was to issues of our time. Secondly, upon reading about his interactions with children, his own autobiography, and even little hints from his essays I got the picture of him as a comic character. Since only one collection of works of his for children has survived (and is rather unknown) I thought of presenting him to children of today through Uncle Chestnut.

Q: You mentioned G.K. Chesterton's influence on people like C.S. Lewis, Agatha Christie, Mahatma Gandhi. Could you expound on this a little?

A: That could be a book in itself! This post summarizes and sources the greatest of his impacts: http://augustine.livejournal.com/7853.html
There is also a short video introduction to his legacy here: http://www.youtube.com/watch?v=lnQWQKMAtek

Q: How did you do research for these stories? He was such a prolific writer, how did you select these 4 anecdotes for the book?

A: Selecting stories, quotes, plots, and concepts to boil down into 4 stories for the first book was the hardest - in fact over the whole series I think it will continue to be challenging as I keep finding more elements to tie into story ideas. Each story itself has numerous pieces of Chesterton strewn throughout. For example, in the last story, "The Easy Job" Chesterton's remarks on "believing in yourself" are found in "Orthodoxy," his forgetting to write his column in the midst of a house full of children is from an essay in the Illustrated London News, his puppet theatre antics were recorded by his biographers, and his thoughts on the the value of the mother in the home came from his book "What's Wrong with the World."

A: Not yet - you've asked some great questions, thanks again!

Thank you, Paul for taking the time to stop by and chat with us!

Review of The Inconvenient Adventures of Uncle Chestnut by Paul Nowak

In the first of a series, Paul Nowak shares four boyhood anecdotes with his Uncle Chester, the famous G.K. Chesterton. Each story has a moral, the lesson that Uncle Chestnut taught to his nephew Jack. The book also contains quotations taken from G.K. Chesterton's numerous writings.

The Inconvenient Adventures of Uncle Chestnut is a brief introduction to G.K. Chesterton. Although I had previously heard of G.K. Chesterton but knew little about him. The four short stories give a glimpse of the kindly and insightful man. While the book wasn't to my taste, I expect that it will appeal to many children and parents. It will provide people of all ages many hours of enjoyment and introduce a new generation to an important literary figure.

Here's one quote that gives a sense of Uncle Chestnut:

Thank you to Bostick Communications and Paul Nowak for this opportunity!

To learn more about the author or preview the book, visit the Uncle Chestnut website at www.unclechestnut.com
Posted by Gaby317 at 10:37 AM