Review of Take Me Out to the Ballgame by Gary Morgenstein

Synopsis:
Take Me Out to the Ballgame is an unusual thriller carefully combines baseball and politics with the pain of the current financial crisis. The Buffalo Matadors have not come close to a world championship in close to forty years, but their new owner, Harry Witowsky, is a self-made hardware store millionaire determined to turn the team around. With jobs down and mortgages failing, Harry believes that fans rely on baseball to escape their increasingly dire lives. Savoring the new and glamorous image of himself as owner of a baseball franchise, Harry and his exploitative marketing assistant Switzer, develop unorthodox ways to spur fan involvement and promote the Mats. On "Mortgage Day" Harry picks out one ticket holder and pays his mortgage for a full year. Mortgage Day wins fan loyalty while simultaneously triggering an Attorney General investigation. By undertaking to assume someone else's mortgage, the AG considers Harry to have illegally acted as a bank without a license. Egged on by Switzer, Harry stands firm the AG and covers the mortgage with his own money. Mortgage Day is public relations move that changes the Mats and Harry's life and it is just the start of increasingly fan oriented and risky promotional stunts. Add to this mix, aging sports reporter Eddie Olds. Eddie works with Harry and Switzer to encourage greater fan participation even as an uglier element starts to rise. It begins innocently enough, encouraging fans to become part of the action, "a tenth player", first by stopping foul balls from being caught. But with the ushers no longer policing liquor and unruly behavior in the stands, incendiary billboard slogans, and the unexpected chance of winning the pendant, things quickly escalate and everything changes.
The Mats fans are hooligans like English soccer fans, but the self proclaimed Number One fan Cal stands out from the start. Insecure and a loser, the Mats had always been his grand passion. When the team suddenly becomes popular, Cal holds himself apart from the new "Where's My Bailout?" fans. Obsessed with the possibility of winning the championship, everything else recedes from Cal's life. Increasingly unstable and paranoid, Cal concocts ways to help the Mats reach their goal.
Review:
Take Me Out to the Ballgame is fast paced, absorbing, and funny. From those that see the danger in its early stages like the Mat's longtime manager Cy to Mickey, Cal's longtime friend and baseball buddy, each of the characters are complex and carefully developed. Each scene layers upon the next to push the action forward as the absurdity adds to the humor. I highly recommend this book, particularly to baseball aficionados.
Publisher: CreateSpace (June 24, 2009), 290 pages.
Review copy courtesy of the Author.
Additional reviews of Take Me Out to the Ballgame on Amazon.
About the Author:

Gary Morgenstein’s most recent critically acclaimed novels, Jesse’s Girl, about a widowed father’s search for his adopted teenage son, and the romantic triangle Loving Rabbi Thalia Kleinman, are also available on Amazon.com. His chillingly prophetic play, Ponzi Man, performed to sell-out crowds at the New York Fringe Festival and his other full-length work, You Can't Grow Tomatoes in the Bronx, was workshopped at the Rattlestick Theatre. Currently he does PR for Syfy and lives in Brooklyn, New York, with lots of books and rock CDs. 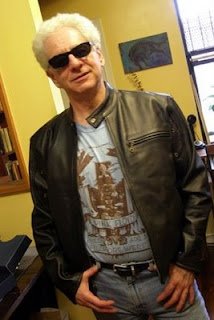 Q: When did you begin writing fiction?
GM: When I was around eight years old, growing up in the Bronx under the shadow of Yankee Stadium, I created this series featuring a fictitious Yankee shortstop. I've never looked back. I've also been a newspaper reporter for the Cincinnati Post and wrote for professional wrestling magazines like Pro Wrestling Illustrated. It was the only job I've ever had where you wrote a story calling a rulebreaker a mean SOB and they'd call and thank you. Very surreal.

Q: You have created unusual and complex personalities and plots. Do you find inspiration for your novels in your life?
GM: Like all writers, I draw from real life, but I think it can be dangerous writing reality as fiction. First of all, it's very limiting because you become more intent on how you are portraying someone rather than creating a whole new character. So I prefer to view it as using emotional footprints. You take what happens in your life and absorb the raw emotions, employing them to create a new world. Sure, occasionally you use things because they are just too good not to! Like in Loving Rabbi Thalia Kleinman, I couldn't resist stealing a couple of online dates.

Q: During ThrillerFest, one of the speakers said that character drives plot. Do you agree? How would you characterize your work?
GM: Oh, I definitely start and finish with my characters. I think okay, here is a person and here is the situation and how would they react and let it take off from there. In Jesse's Girl, it all began with the midnight phone call Teddy Mentor received about his son Jesse running away from the wilderness treatment program. He had to look for him. How far would a father go for his son? That was the storyline that propelled me. Or in Take Me Out to the Ballgame - what if the perfect storm of politics and baseball takes a team and a city over the line, except there is one fan who believes that he is the Number One Fan.

Q: Who do you enjoy reading? Do you have any book recommendations?
GM: My favorite writer is Hemingway and the novel, For Whom the Bell Tolls, is my absolute favorite. I periodically re-read it every few years and it gets better and better. I read a lot of history along with science fiction and mysteries. I especially like foreign mysteries. The Swedish writer Henning Mankell's Kurt Wallender books are outstanding.

Q: This is a shift, but do you outline when writing?
GM: I like to have some vague idea of where I'm going and how I might end up, so I do a rough outline with notes. But part of the fun of writing, and most of it isn't, is being surprised. George Patton said that before a battle, a plan was everything. Once the battle began, it meant nothing. That's true with novels. Somehow a character visits you from the great creative beyond. In Jesse's Girl, I was totally surprised by the character of Celia, who I envisioned as just a one-scene pony but then became integral to the novel.

Q: Is there something that no one has asked you that you wish they had?
GM: I guess what would I do if I had never written. That is something I really can't imagine. Where would all those characters have gone?

Thank you to Gary Morgenstein for this opportunity for sponsoring the giveaway.
Gary is giving away a copy of Take Me Out to the Ballgame to one lucky reader!

To enter please post a question for Gary below. Please include your email address, so that I can contact you if you win.

The contest is limited to US and Canada only. No P.O. boxes. The contest ends at midnight of August 14, 2009.
Other books by Gary Morgenstein

Synopsis of Jesse's Girl courtesy of Amazon:
The story opens as a jarring phone wakes lifelong Brooklynite and widowed father Teddy Mentor well after midnight. It's the Montana wilderness program saying that his 16-year-old adopted son has run away - and they haven't a clue where he's gone. Only two weeks ago, Jesse had been taken to the program by escorts to deal with substance abuse problems. Jeopardizing his flagging PR job in New York, Mentor rushes across the country to find Jesse, who is off on his own quest: to find Theresa, the sister he's never known. When Teddy finally discovers Jesse at a bus stop in Illinois, he is torn between sending him back or joining his son on a journey to find this girl in Kentucky. But he decides to go and they become embroiled in a grisly crime when Theresa's abusive husband Beau attacks her - Jesse stabs the big beast of a man, leaving him for dead.
Reviews of Jesse's Girl on Amazon and Starting Fresh.

Synopsis of Loving Rabbi Thalia Klienman, courtesy of Amazon:
What happens when a hopelessly romantic divorced man falls madly in love with a beautiful woman rabbi -- but he's not yet over his ex-wife? In other words, why are relationships always so difficult? As this poignant love triangle opens, Joss Katz crashes a bat-mitzvah and becomes smitten with the enigmatic Rabbi Thalia Kleinman. Desperate to meet her, Joss contrives a wild excuse about needing spiritual guidance and they begin a roller-coaster relationship. But Kleinman has a past shadowed by terrorism. She manipulates Joss into mentoring her younger brother Bobby. Brilliant and troubled, Bobby is embroiled with Meir Schlom, who has a dangerous scheme for confronting surging world-wide anti-Semitism. Besides pursuing Thalia and his kooky former spouse Ellen, Joss deals with his curmudgeonly roommate and best friend, Mandelbaum. Embittered by his messy divorce, Mandy creates an organization dedicated to a life free of entanglements with women called Straight and Happy Without Them.
Reviews of Loving Rabbi Thalia Kleinman from The Book Faerie Reviews and Amazon
Posted by Gaby317 at 9:24 AM