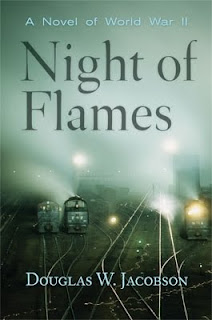 I am excited to be one of the tour hosts for the Book Blog Tour of Night of Flames: A Novel of World War II by Douglas W. Jacobson. When I first read about the book Pump Up Your Book Promotion, I couldn't wait to sign up!

Today, I'd like to welcome the author, Douglas W. Jacobson who will share what he loves about war stories and the people that we celebrate through these stories of war. 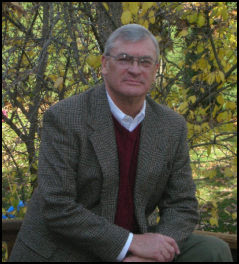 I must correct myself straight off. I don’t really love war stories as much as I do stories about the people caught up in them. War is as much a part of the human experience as breathing. Throughout history there have always been conflicts among people and there always will be. It is part of our nature as fallible human beings.

War is an extension of conflict taken to the extreme. And the ultimate tragedy of war is that the people who suffer the most are the common people swept up in it, those who had nothing to do with starting it and whose only desire is for the strength and good fortune to live through it.

In his book, World Crisis, Winston Churchill wrote, “Thus when all the trumpets sounded, every class and rank had something to give . . . but none gave more, or gave more readily than the common man or woman.” In those eloquent words lie the essence of the story I endeavored to tell in writing Night of Flames. Through the characters in the story—Anna Kopernik, a university professor in Krakow, Poland and her husband, Jan, a cavalry officer—I have attempted to pay tribute to the countless acts of nobility and courage performed by common people caught up in the catastrophe of humanity’s darkest hour. What Anna and Jan endured during the long night of Nazi occupation is exactly what hundreds of thousands of real life people endured during this greatest and most damaging of all wars. I have tried, through this work of fiction, to honor their bravery and their memory so that future generations may know the real tragedy of war.

In closing I would repeat the quotation from the legendary general of the 1st World War, Ferdinand Foch, which has served as an inspiration in my writing; “The most powerful weapon on earth is the human soul of fire.”

Thank you so much for taking the time to drop by, Douglas! Your respect for acts of bravery and heroism comes through so well both in this post and in the novel. Thank you again - and congratulations on Night of Flames!

About the Author:
Douglas W. Jacobson is an engineer, business owner and World War Two history enthusiast. Doug has traveled extensively in Europe researching stories of the courage of common people caught up in extraordinary circumstances. His debut novel, Night of Flames: A Novel of World War Two was published in 2007 by McBooks Press, and was released in paperback in 2008. Night of Flames won the 2007 Outstanding Achievement Award from the Wisconsin Library Association. Doug has also published articles on Belgium’s WW2 escape organization, the Comet Line; Poland’s 1st Armored Division; and the liberation of Antwerp. Doug has just completed his second novel set in Europe at the end of WW2. You can visit his blog at www.douglaswjacobson.blogspot.com.

Thank you so much, Dorothy and Pump Up Your Book Promotion for the chance to participate in this book blog tour. Come back tomorrow to read my review of Douglas W. Jacobson's Night of Flames. 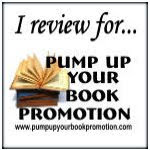