Welcome to the Book Blog Tour of Ted Dekker's The Bride Collector which comes out on April 13, 2010. 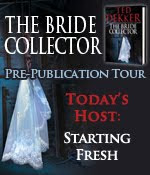 The blurb:
FBI Special agent Brad Raines is facing his toughest case yet. A Denver serial killer has killed four beautiful young women, leaving a bridal veil at each crime scene, and he's picking up his pace. Unable to crack the case, Raines appeals for help from a most unusual source: residents of the Center for Wellness and Intelligence, a private psychiatric institution for mentally ill individuals whose are extraordinarily gifted.

It's there that he meets Paradise, a young woman who witnessed her father murder her family and barely escaped his hand. Diagnosed with schizophrenia, Paradise may also have an extrasensory gift: the ability to experience the final moments of a person's life when she touches the dead body.

In a desperate attempt to find the killer, Raines enlists Paradise's help. In an effort to win her trust, he befriends this strange young woman and begins to see in her qualities that most 'sane people' sorely lack. Gradually, he starts to question whether sanity resides outside the hospital walls...or inside.

The FBI believes that the killer plans to murder seven women. Can Paradise help before it's too late?

Review:
Ted Dekker's The Bride Collector introduces us to Special Agent Brad Raines who is tracking a highly intelligent, mentally unstable, and seemingly untraceable serial killer. But beyond the fast-paced action, the violence, and plot twists of a good detective thriller, Ted Dekker adds an element of humor and humanizes schizophrenia and mental illness through the characters of the Center of Wellness and Intelligence and through the personal history of our lead character, Brad Raines.

Although Special Agent Brad Raines is attractive, intelligent, and strong like many of the usual lead characters in detective thrillers, Raines doesn't come across like the usual witty and invincible lead. Raines suffered a heavy loss in his personal life and hasn't been able to fully recover. His loss makes Raines better able to empathize and understand the insecurities and thought processes of the people around him from the patients at the Center to the serial killer they're calling the Bride Collector. It also makes Raines more interesting than your usual lead detective. If you're looking for a fast-paced and unconventional detective thriller, check out The Bride Collector.

About the Author, courtesy of the publisher:
Ted Dekker is a New York Times bestselling author of more than twenty novels with a total of more than 3 million books in print. He is known for thrillers that combine adrenaline-laced plots with incredible confrontations between good and evil. Learn more about him at Ted Dekker's website at http://www.teddekker.com/ You can follow Ted Dekker on Facebook at http://www.facebook.com/teddekker

Thank you to Miriam and Hatchette Book Group for this review opportunity!
Posted by Gaby317 at 5:49 PM