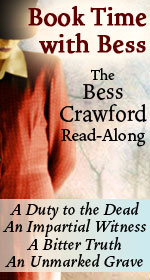 I'm signing up for Book Time with Bess Crawford, a read along of the new Charles Todd mystery series set in Edwardian England during World War 1.  The lead character, Bess Crawford, is a nursing sister - a volunteer nurse - who is based in France for part of the War.  She had spent much of her early years in India as her father is the well respected Colonel Crawford.

If you're fond of mysteries and the time period (think Downton Abbey), you'll probably enjoy the series as well.

In fact, the New York Times published an article a few months ago that mentioned the ways in which  publishers have met the strong popularity of Downton Abbey with an upsurge of books of similar period of Edwardian England and style.   The latest Bess Crawford mystery, A Bitter Truth is among the books recommended.

Rose: My Life in Service to Lady Astor by Rosina Harrison
What the Butler Winked At by Eric Horne
Parade's End by Ford Madox Ford
Love in a Cold Climate by Nancy Mitford
A Bitter Truth by Charles Todd
Into the Silence by Wade Davis
The Decline and Fall of the British Aristocracy by David Cannadine

This read along is set up by Book Club Girl and follows this schedule:

If you'd like to learn more or want to sign up, head over to Book Club Girl's blog.