BEA 2014 is winding down.  It's the end of the second day and tomorrow will be a combination of BEA with many activities and events centered on non-industry book lovers.  The BookCon, formerly "Power Reader Day" has been well publicized through BEA.

I know that many of my reader friends were quick to sign up.

But before BookCon begins, I"d like to talk about BEA 2014.  For those of us in the NYC area who have been fortunate enough to attend BEA for the last few years, we wonder what sort of changes may occur when BEA moves to Chicago in 2016.

Certainly, the camaraderie will be a little different.  I have made some good friends at BEA these last few years.  I very much look forward to seeing and catching up with Angela of Dark Faerie Tales, Tonia of Literary Cravings and Pam of Midnyt Reader.  We don't usually see each other during the year, so when we run into each other at BEA, we talk about our favorite books and catch up on our lives.   These friendships remind me of the warmth of the book blogger community and I'm again so happy to be part of this tribe.

As BEA is a celebration of books, authors, and their publishers, so much of the days leading up to BEA and of BEA is focused on the buzz books, debut authors and new reads by old favorites.  I've come to associate BEA with authors and characters that I discovered through PW's write ups, through meeting with publishers and publicists, through conversations while waiting in line for book signings.  My first BEA, the senior bloggers advised me to line up for the ticketed book signing of Catching Fire by Suzanne Collins. This was way back when Suzanne Collins actually signed the books!  At some point, she stopped signing the books and relied on a stamp of her signature.  Can you imagine signing hundreds of thousands or millions of copies of books?   I also picked up my first Louise Penny detective novel and discovered one of my all time favorite detectives, Inspector Armand Gamache and Three Pines, the remote town that isn't covered by maps but is so close to Quebec.  I also received this wonderful mystery by debut author Alan Bradley and met Flavia de Luce, the eleven-year old British aristocrat, chemistry genius and amateur sleuth.  I'm afraid I can go and on about the authors and books that enriched my life thanks in large part to the buzz and opportunity to bring them home from BEA!

Let me tell you about this year's BEA before it's all over.  We still have one more day, so if you're in NYC or if you can get yourself to NYC tomorrow, please do come!! It'll be the best $35 you'll spend.

I'd found some beautiful cookbooks:

The huge, glossy, and absolutely luxe Gusto: The Very Best of Italian Food and Cuisine with Foreword by Cesare Casella published by Abbeville Press Publishers. 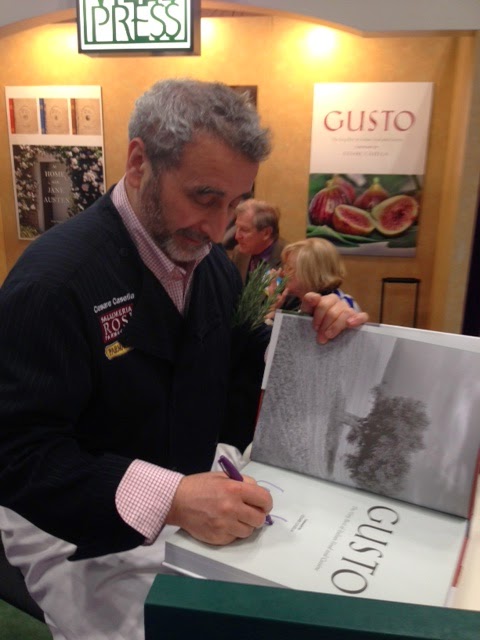 On the first day of BEA, we lined up for finished copies of Diana Yen's debut book: A Simple Feast: A Year of Stories and Recipes to Savor and Share by Diana Yen and The Jewels of New York.    Jewels of New York is a creative studio led by Diana Yen that "combines a love of cooking with the beauty of everyday things." The studio uncovers hidden treasures of New York and shares them through seasonally based cooking.  Yum!

Today, there was a lot of interest in Amy Chaplin's At Home in the Whole Food Kitchen: Celebrating the Art of Eating Well.  Amy Chaplin is the former executive chef of Angelica Kitchen had worked as a personal chef and counts Natalie Portman and Liv Tyler as clients.

There is so much to say about the books and authors that I'd seen and found at BEA 2014, that I'm afraid that I'll have to write several posts.  If you'll forgive me, let me just give you some information about tomorrow's BEA, the BookCon.  I'll write more about the first 2 days of BEA 2014 in the next few days!

BookCon 2014 begins at 9 am. You can register online or at the Javitz Center tomorrow.  Do plan to get to Javitz early.  Many of the panels are ticketed, so you'll have to line up for a seat and the chance to meet the authors.  Which authors?  Who will be there?  Here are a few of the big name stars:  Tina Fey, Amy Poehler, Mario Batali, Cary Elwes, Alan Cumming, Jason Segel, Jason Bateman, Martin Short, John Grisham, Lemony Snicket, R.L. Stine, Stan Lee (Creator of Spiderman), Rick Riordan (Percy Jackson!), Jeff Kinney (Diary of a Wimpy Kid), James Patterson,   Deborah Harkness (All Souls Trilogy!), Carl Hiaasen, Cassandra Clare, Holly Black, Libba Bray, John Green, Grace Lin, James Patterson, Jodi Picoult, Kathy Reichs, Lev Grossman, Maggie Stiefvater, Marie Lu, Paul Zelinsky, Rachel Renee Russell (The Dork Diaries series), Sylvia Day, Veronica Roth....I may have listed James Patterson twice - because he isn't just an author, he does so much to promote literacy and reading in America (World Book Night, grants to independent bookstores, gifts to public schools and libraries).

Want to learn more?  Head to http://www.thebookcon.com to find out more and TO REGISTER!  Hope to see you there!