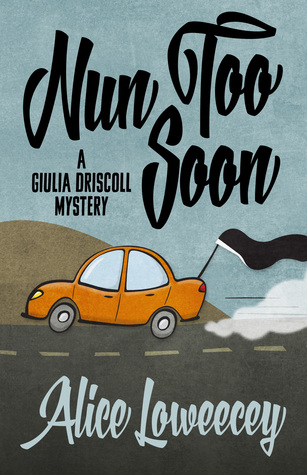 Giulia Falcone-Driscoll has just taken on her first impossible client: The Silk Tie Killer. He’s hired Driscoll Investigations to prove his innocence and they have only thirteen days to accomplish it.Talk about being tried in the media. Everyone in town is sure Roger Fitch strangled his girlfriend with one of his silk neckties.And then there’s the local TMZ wannabes—The Scoop—stalking Giulia and her client for sleazy sound bites.On top of all that, her assistant’s first baby is due any second, her scary smart admin still doesn’t relate well to humans, and her police detective husband insists her client is guilty. About this marriage thing—it’s unknown territory, but it sure beats ten years of living with 150 nuns.Giulia’s ownership of Driscoll Investigations hasn’t changed her passion for justice from her convent years. But the more dirt she digs up, the more she’s worried her efforts will help a murderer escape.As the client accuses DI of dragging its heels on purpose, Giulia thinks The Silk Tie Killer might be choosing one of his ties for her own neck.

I"m embarrassed by the delay in posting a review of Alice Loweecey's Nun Too Soon. It is 5 years since the book was published and I'm only now talking about it.

I do want to say that after I read Nun Too Soon, I immediately wanted to know what other adventures Giulia Driscoll got herself into. I ended up ordering the other books that same week and following Alice Loweecey's posts on Facebook...

So, this is a review of Nun Too Soon but also of the Giulia Falcone-Driscoll novels. I admit that I'm mysteries and cozies are among my favorite books. In Giulia Falcone-Driscoll, Alice Loweecey has created a heroine with humor, drive, spunk and a unique disconnect that comes from spending much of her young adult life in a convent.

When we encounter Giulia, she's mustered up the courage and determination to leave her old life. at considerable sacrifice. Leaving behind life as Sister Mary Regina Coelis, Giulia also finds that she has limited funds and no family support. She has to navigate modern life after spending much of her young adulthood in a convent. The small things take getting used to but Giulia does so with grace, humor and grit. I found myself caring and rooting for her immediately.

My own fondness for nuns might be unusual but it comes my mother's continued friendship with the nuns that taught her in high school. These nuns were daring, funny, open minded and introduced a love of literature and learning to my mother and her friends. So, when Giulia shows spirit, daring and humor as she runs a new detective agency I can imagine the frustration and excitement.

In Nun Too Soon, Giulia hasn't just left the convent but she's found love, married, and has begun her career as a private investigator. Giulia has had some success at this point and the Diocese trusts her to investigate their private business. Even before the mystery begins we know Giulia is competent, discrete and a reasonable/supportive boss. Giulia's employees are Zane whose previous work experience was with a large accounting firm that drilled into him the requirement that he work constantly and under pressure. Giulia's kindness and sympathy as she encourages Zane to work less endears her to me. Zane's opposite number is Sidney, a highly competent, athletic blonde administrative assistant. The office dynamics and humor are another fun part of the story.

A lawyer hires Giulia to investigate the strength of the case against his wealthy client accused of being a serial killer. The accused specifically asked his lawyer to hire Giulia because she's "the opposite of those old-movie detectives" and "in charge, but not pushy or bitchy or too masculine." Giulia doesn't expect the investigation to become personally dangerous - and we root for her as faces a dangerous opponent.

Baker of brownies and tormenter of characters, Alice Loweecey recently celebrated her thirtieth year outside the convent. She grew up watching Hammer horror films and Scooby-Doo mysteries, which explains a whole lot. When she's not creating trouble for her sleuth Giulia Driscoll or inspiring nightmares as her alter-ego Kate Morgan, she can be found growing her own vegetables (in summer) and cooking with them (the rest of the year).