The Hangman's Secret (A Victorian Mystery #3) by Laura Joh Rowland 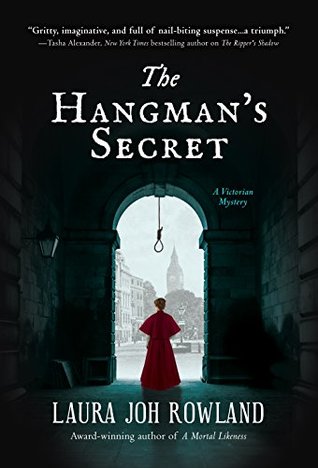 The Hangman's Secret by Laura Joh Rowland
Series: A Victorian Mystery (Book 3)
ISBN-10: 1683319028 - Hardcover $
Publisher: Crooked Lane Books (January 8, 2019), 304 pages.
Review copy courtesy of the publisher and NetGalley.
The blurb:  Photographer Sarah Bain and her friends Lord Hugh Staunton and sometime street urchin Mick O’Reilly are private detectives with a new gig—photographing crime scenes for London’s Daily World newspaper. The Daily World is the latest business venture of their sole client, Sir Gerald Mariner, a fabulously wealthy and powerful banker.
One cold, snowy January morning, Sarah, Hugh, and Mick are summoned to the goriest crime scene they’ve ever encountered. A pub owner named Harry Warbrick has been found hanged and decapitated amid evidence of foul play. His murder becomes a sensation because he was England’s top hangman and he’s met the same fate that he inflicted on hundreds of criminals.Sir Gerald announces that the Daily World—meaning Sarah and her friends—will investigate and solve Harry Warbrick’s murder before the police do. The contest pits Sarah against the man she loves, Police Constable Barrett. She and her friends discover a connection between Harry Warbrick’s murder and the most notorious criminal he ever executed—Amelia Carlisle, the “Baby-Butcher,” who murdered hundreds of infants placed in her care.Something happened at Amelia’s execution. The Official Secrets Act forbids the seven witnesses present to divulge any information about it. But Harry had a bad habit of leaking tips to the press. Sarah and her friends suspect that one of the other witnesses killed Harry to prevent him from revealing a secret related to the execution. What is the secret, and who hanged the hangman?
My review:
I've been enjoying Laura Joh Rowland's mystery novels set in Ancient/Feudal Japan for years so I was interested to read her latest historical mysteries set in Victorian London. This time we follow her heroine Sarah Bain, a photojournalist who is in love with a detective constable. Sarah finds herself hiding much about her personal life from PC Barrett not so much for her own sake but to protect her fugitive father.
Sarah's living arrangements are unorthodox as well. Sarah doesn't have family left but she lives with her close friends and they work together to cover news and uncover crimes. Hugh is gentry and was disinherited because for being gay. Homosexuality is still a criminal offense in Great Britain and there is considerable stigma and danger to Hugh. Mick is still a teenager but has a hard time adjusting to school - he would prefer to make a living and be treated like an adult.   Sarah, Hugh and Mick all work for Sir Gerald at the Daily World. They'd earned his trust in their previous adventures and he gives them a position of trust.
As Sir Gerald at the Daily World challenges the police to a competition as to who can discover the murderer in the latest crime, we readers and Sarah's group know it is a bad idea.  But bad ideas and grave errors don't much harm the rich and powerful -- instead Sir Gerald is drawn to the popularity of the idea, the huge interest from the public and his own image of a crusader of justice.
There is much professional jealousy and intrigue at the Daily World and Sarah Bain finds herself at the center of an expose and controversy.  When Sarah, Hugh and Mick's investigation leads to a red herring and accusations that blow up, the Daily World is forced into an awkward position and Sarah, Hugh and Mick find themselves thrown over.
This doesn't stop them from conducting their own investigations but it does draw a bullseye on their collective backs. It also makes the story much more interesting.  I found myself rooting for Sarah and her friends and drawn into this version of Victorian London.  Laura Joh Rowland has created characters that one can care about and an story that it hard to put down.
About the Author: Laura Joh Rowland is the author of A Mortal Likeness, the second book in her mystery series set in Victorian England, starring photographer Sarah Bain. The third book, coming out in January 2019, is The Hangman’s Secret. Her other series features 17th-century Japanese samurai detective Sano Ichiro. Her work has been published in 21 countries, won RT Magazine’s Reader’s Choice Award, and made The Wall Street Journal’s list of the five best historical mystery novels. Laura holds a Bachelor of Science and a Master of Public Health degree from the University of Michigan. She is a former aerospace scientist, a painter, and a cartoonist. She lives in New York City with her husband Marty. Visit her website at www.laurajohrowland.com