Ellie Alexander's Beyond a Reasonable Stout 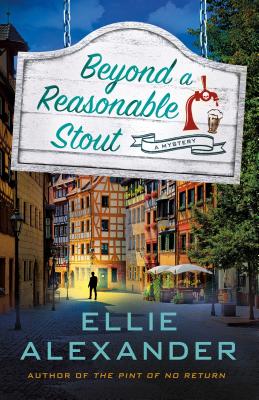 ISBN-10 : 1250766109 - Mass Market Paperback $7.99
Publisher : Minotaur Books (September 29, 2020), 304 pages.
Review copy courtesy of the publisher and NetGalley.
The blurb:  In the Bavarian village of Leavenworth, Washington, the tourists are gone and the local villagers prepare for the upcoming winter light festival. Soon the German-inspired shops and restaurants will be aglow and visitors will return to the northern Cascades to drink warm mulled cider and peruse the holiday markets. Until then, Sloan Krause and her partner in crime Garrett Strong are experimenting with a new line of “hoppy holiday” craft beers at their brewery.But the low-key vibes at Nitro are suddenly disrupted by a local political scandal: City Councilmember Kristopher Cooper is running for re-election on a platform of making Leavenworth dry―until, just before election night, Kristopher turns up dead. Now, with every beer-related businessperson in Leavenworth coming under suspicion, it’s up to Sloan to find out who the guilty party really is…before someone else gets tapped for murder.
My review: I am one of those readers that is reasonably comfortable starting a book in mid-series. if I like the characters and first book I find, I will go back and read all the books in order.  Honestly, if I find a book and an author that I like, I hunt down their backlist.  Ellie Alexander is one of the authors that I'd learned about through the publisher and NetGalley.  In the days of browsing bookstores and libraries, I likely would have found her books and loved them.
Sloan Krause had grown up in the system as a foster child. She has mostly painful memories of her childhood but much of this is the distant past. She's built a family and strong friendships in the small town Leavenworth. It's Germanic town with German-inspired shops and architecture and families that immigrated from Germany. Sloan married into the Krause family and they've given her the stability and love that she wanted growing up. Even as Sloan and her husband separated, her ties to her in-laws are unharmed.
While Sloan's life centers around her teenage son, her family and her love for brewing beer, she seems to be the glue/part of the center of the town. She knows how to keep a secret and is often the confidante of many other citizens. Her desire to help puts her in a strange position and she is more than willing to dive into a mystery.
In Beyond  a Reasonable Stout, Leavenworth faces a strange challenge with the upcoming elections. A City Councilmember and candidate Kristopher Cooper is running on the platform of turning the town known for its beer and Octoberfest into a dry town.  When Kristopher Cooper is discovered dead so many are relieved and under suspicion.  Sloan finds herself drawn into the investigation and we follow her along as she balances the pressures of work, family and solving the latest murder.  Ellie Alexander combines an engaging character with a fairytale of a town and delicious food and beer to give us people that we care about and a place we'd love to move to and then mixes in a suspicious death. I'm hooked and certain that you will be too!
About the Author:  ELLIE ALEXANDER is a Pacific Northwest native who spends ample time testing pastry recipes in her home kitchen or at one of the many famed coffeehouses nearby. When she's not coated in flour, you'll find her outside exploring hiking trails and trying to burn off calories consumed in the name of research. She is the author of the Bakeshop Mysteries, including Meet Your Baker and A Batter of Life and Death, as well as the Sloan Krause mysteries.
Posted by Gaby317 at 4:33 PM