Murder at the Brightwell (#1 of 7 Amory Ames Mysteries) by Ashley Weaver
ISBN-10 : 125004636X - Hardcover $27.99
Publisher : Minotaur Books; First Edition (October 14, 2014), 336 pages.
The blurb: Amory Ames, a wealthy young woman questioning her marriage to her notoriously charming playboy husband, Milo, is looking for a change. She accepts a request for help from her former fiancé, Gil Trent, not knowing that she’ll soon become embroiled in a murder investigation that will not only test her friendship with Gil, but also will upset the status quo with her husband.
Amory accompanies Gil to the luxurious Brightwell Hotel in an attempt to circumvent the marriage of his sister, Emmeline, to Rupert Howe a disreputable ladies man. There is more than her happiness at stake, however, when Rupert is murdered and Gil is arrested for the crime. Matters are further complicated by Milo’s unexpected arrival, and as the line between friend and foe becomes less clear, Amory must decide where her heart lies and catch the killer before she, too, becomes a victim.
My Review:  I admit that I'd read the first in the series after reading a later Amory Ames novel.  I'd enjoyed Ashley Weaver's writing and her depiction of the wealthy, privileged and discontented Amory Ames as an amateur sleuth.  In Murder at the Brightwell, Amory is young, beautiful and disillusioned with her gorgeous and glamorous husband Milo. They've been married for five years and her husband's escapades and adventures with other women has filled the society pages and scandal sheets.  Amory has been holed away either in their luxurious London flat or their large estate but largely on her own while Milo travels to expensive locations to gamble, party, socialize, etc.
After the romance cooled, Amory has been left to wonder if she'd made the wrong choice and if she should have married her longtime friend and fiance Gil.  Amory had ended the engagement soon after she met Milo and feels guilty about the way she treated Gil all those years ago. Gil comes to Amory to ask for her help in dissuading his younger sister from marrying a beautiful young man much like Amory's Milo.  Gil has seen the different articles and photos of Milo with glamorous women and still holds a torch for Amory.  Though he doesn't expect Amory to leave Milo for him, he hopes that spending time together will rekindle their old love or at least to help persuade his beloved sister of the danger that comes with marrying the dangerous society playboy type.
For Amory, it seems strange that just as she is talking to Gil again, her husband returns from his own adventures in Monte Carlos. Amory resents Milo's adventures and welcomes the chance to take some time away, to help Gil after having hurt him in the past and to help his younger sister that she knew. So, Amory joins Gil's group of friends at the luxury hotel resort the Brightwell.
At the Brightwell, Amory finds a mix of characters, many catty society women, some staid and socially ambitious couples, the younger sister with her glamorous and cold fiance, a respected theater actor, Gil and, unexpectedly, Milo Ames. There are various delicious meals, awkward moments, flirtatious men but there is also the sudden and violent death of the young fiance.  Amory is desperate when Gil is arrested and she finds herself working to find the identity of the killer.
Milo and Amory dance around each other while Gil hovers in the picture.  As Amory tries to sort through her emotions and balance what she wants and needs, she is quite easy to like. I found myself enjoying Murder at the Brightwell very much! I'm determined to read all of Ashley Weaver's Amory Ames mysteries.  The language and characters are a delight!
#MurderattheBrightwell #AmoryAmes #AshleyWeaver #NetGalley 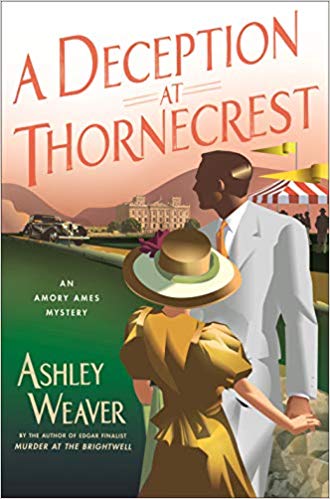 A Deception at Thornecrest (#7 of 7 Amory Ames Mysteries) by Ashley Weaver
ISBN-10 : 1250159792 -Hardcover $27.99
Publisher : Minotaur Books (September 8, 2020), 288 pages.
Review copy courtesy of #NetGalley and the publisher.
The blurb: Amory Ames is alone at her country house Thornecrest, enjoying her last few weeks of peace and quiet as she prepares for the imminent arrival of her baby. Her husband, Milo, is in London on business, and Amory is content to catch up on her correspondence, organize the nursery, and avoid the well-meaning if rather overbearing company of the ladies in the village as they prepare for the Springtide Festival. But then a woman appears on her doorstep, claiming to be another Mrs. Ames, Milo’s wife.
Amory's marriage has had its ups and downs in the past, but her faith in her husband has been restored, and Milo has been nothing but thrilled about becoming a father. Though the alleged second Mrs. Ames seems earnest, Amory is convinced she must be mistaken, a belief that Milo confirms upon his homecoming. However, when another unexpected visitor arrives at Thornecrest, secret identities and whirlwind romances appear to be becoming par for the course.
It's not until the day of the festival, when Milo's stable hand Bertie is found dead, that the strange characters appearing in town begin to seem more sinister, and Amory is determined to uncover the killer in the crowd.
Review:  I hadn't read earlier Amory Ames novels and expect that I would have enjoyed A Deception at Thornecrest even more if I was familiar with the sparring between Amory and her husband Milo. Nevertheless, this 7th in the series can stand on its own.
We have Amory, 8 months pregnant and rusticating on the Ames family estate Thornecrest when a beautiful young woman appears claiming to be Mrs Milo Ames. Amory has had to deal with all sorts of scandals and deception from her glamorous and attractive husband but their marriage had been improving. Given their history, this unexpected visitor is particularly unwelcome.
While they later clear up the misunderstanding, we discover that Milo has an illegitimate half brother who has decided to look in on the family estate. Milo is wary while Amory is quick to welcome the new relative into their family. Milo, his half brother Darien, Amory, the brother's former lover Imogen, the brother's new love interest Marena, Marena's ex boyfriend, the Springtime Festival and a murder.
I am very fond of amateur sleuths and Ashley Weaver's Amory Ames series is now a particular favorite. The stories are told in the first person and Amory Ames has a delightful, distinctive voice that reflects wealthy British upper crust in the 1940s. Some phrases and language remind me of Bertie Wooster and Jeeves - but our heroine is smart, courageous, emotionally vulnerable and constantly sleuthing. A Deception at Thornecrest delivers an engaging amateur detective story!
#ADeceptionatThornecrest #AshleyWeaver #NetGalley
About the Author: Ashley Weaver is the Technical Services Coordinator for the Allen Parish Libraries in Louisiana. Weaver has worked in libraries since she was 14; she was a page and then a clerk before obtaining her MLIS from Louisiana State University. She lives in Oakdale, Louisiana.
Posted by Gaby317 at 3:02 PM