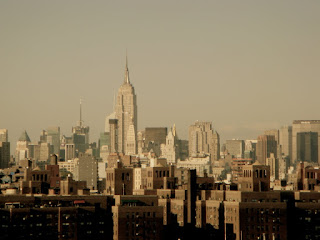 How many times do you want to hear that the events this last week was amazing, incredible, went beyond expectations?  The week was absolutely amazing and made even more fun by the fact that I'd made friends on Monday during the publishing house tours.  Instead of gushing which is likely to bore you, I'll share some of the things that I learned and links to other write-ups that you'll likely find useful and entertaining.

Monday and Tuesday with the publishing house tours that were organized by Yen from Book Publicity Blog and organizers of the Book Blogger Convention.  We given the unique opportunity to visit and chat with folks from Bloomsbury Press, Picador, Scholastic and Penguin.  Wednesday and Thursday were all about BEA 2010.  BEA is overwhelming and I'm glad that I was with Angela of Dark Fairie Tales and Tonia of Literary Cravings.   We'd met during the publishing house tours on Monday and found that we got along really well.  (Meeting new people was a major highlight of my week!) There were receptions as well.  On Wednesday night Harper Collins sponsored a Celebration of Book Bloggers at the Algonquin Hotel. On Thursday the Book Blogger Convention began with a reception from 4 to 6 at the Javitz Center.  I heard that the Book Blogger Convention reception was packed with interesting people - many of whom didn't attend the BBC - and it was a highlight for bloggers.  I missed it and wish that I had gone!  Friday was devoted to the Book Blogger Convention and a nice way to round off the week.

I got up extra early every morning to line up for the tickets to book signings by the most coveted authors.   Waking up at 4:30 a.m. and getting to the Javitz by 5:30 am, I was often either the first person or second person in line.  You don't actually have to get there that early to be sure to get tickets, it's just that I would have been disappointed if I'd slept in an extra 30 minutes and missed the last ticket for Lee Child' s 61 Hours: A Reacher Novel (Jack Reacher Novels)

or Rick Riordan's The Red Pyramid (The Kane Chronicles, Book 1)

.  (I ended up giving away my ticket to the Rick Riordan signing, which I still regret, but that's another story altogether. I'm sure that it will be cherished by a lucky student in Texas!)

Tickets in hand and having registered, Angela, Tonia and I plotted our day.  We'd each prepared our own list of activities based on the rich (read: extensive & overwhelming) list of talks, authors, and books in the BEA program.  Then we checked Publisher Weekly's Show Daily to read about upcoming books and new events.  I discovered Show Daily too late last year and was determined not to make that mistake this year!  Then we discussed which books were were most looking forward to and tried come up with a plan that would allow us to attend the talks and panels and our favorite author signings.  Dark Faerie Tales and Literary Cravings are both more focused on the genres of Young Adult and Fantasy, so I listened carefully to Angela's recommendations.  After all, it was this time last year that  that I discovered Suzanne Collins' Catching Fire  and Kristin Cashore's Fire (Graceling)

through other bloggers.   With that reintroduction to YA, I was hooked!

I discovered a whole list of books through Show Daily and from talking to other booklovers at BEA.  I wasn't able to get most of these books, but I now know to watch out for them and have ordered the ones that I'm dying to read.  So many of the covers are gorgeous, so I thought I'd share them with everyone!

Lauren Oliver's latest books, Delirium is out!  I'd read her debut novel, Before I Fall, through the Barnes & Noble First Look Club -  and thought it was amazing (Read my review here.).  I'd recommended it to my four nieces and friends my age.   I was so excited about Delirium that I was the first person in line -- an hour and a half before she was scheduled to sign the book. The monitors thought I was mental!  PW describes Delirium (Harper) as "a dystopian novel in which love is considered a disease."  (Note: The book descriptions in quotes are all taken from PW's BEA Show Daily.)

I so wanted to meet Mitali Perkins who wrote Bamboo People

but I missed her! Mitali describes Bamboo People is a coming of age story which "takes place against the political and military backdrop of modern-day Burma. Narrated by two fifteen-year-old boys on opposing sides of the conflict between the Burmese government and the Karenni, one of the many ethnic minorities in Burma, Bamboo People explores the nature of violence, power, and prejudice."  I heard from someone who attended the Children's Book and Author Breakfast that the event was one of the best parts of BEA.   She assured me that hearing Mitali Perkins speak in person was as amazing as I'd expected.  Head over to Mitali Perkin's site for Bamboo People at http://www.bamboopeople.org/ or her blog, Mitali's Fire Escape, "a safe place to chat about books between cultures." Isn't that cool?

I'm looking forward to these books:

by James Dashner follows The Maze Runner. It continues just 4 hours after The Maze Runner ends - it's a direct sequel and the Gladers must cross the Scortch, a wasteland which has left many survivors insane.

The Moses Expedition: A Novel

by Juan Gomez-Jurado is described as a summer blockbuster, in the best sense of the word. It's a thriller based on the search for the Bible's lost Ark of the Covenant.

by Don Winslow is a "nonstop action novel" with a Laguna Beach, CA marijuana kingpin who is kidnapped by a Baja cartel.

The Lost and Forgotten Languages of Shanghai: A Novel

by Ruiyan Xu tells the story of a "Shanghai businessman whose childhood English returns after an accident, but he discovers that he can no longer speak Chinese."

looks like it'll become a children's classic.  It's the story of a lion who roams the halls of the New York Public Library breaking the rules and endearing himself to readers.

If any of the books tempt you, I should mention that Borders is circulating a 33% off coupon which expires on June 7, 2010.   Or click on the link which will take you directly to Amazon.

Armchair BEA
I should mention that Armchair BEA was organized for those folks who weren't able to come to NYC for BEA this year.  Pam from Bookalicio.us served as the on-site reporter, she diligently covered each event (often with a video camera).   Even though I was at BEA, I found her reports fun, informative, and  helpful. There's just so much to do at BEA that the first thing is to acknowledge you can't do it all!