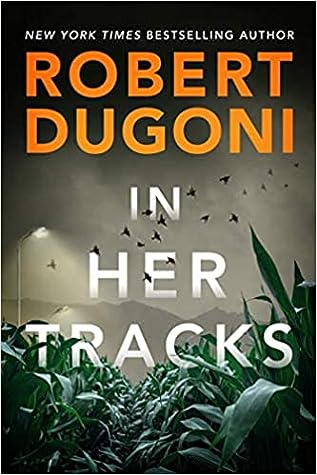 In Her Tracks by Robert Dugoni

The blurb:  What family secrets are behind two disappearances? Seattle detective Tracy Crosswhite is determined to uncover the truth in the latest installment of New York Times bestselling author Robert Dugoni’s heart-stopping series.
Returning from an extended leave in her hometown of Cedar Grove, Detective Tracy Crosswhite finds herself reassigned to the Seattle PD’s cold case unit. As the protective mother of an infant daughter, Tracy is immediately drawn to her first file: the abduction of a five-year-old girl whose parents, embattled in a poisonous divorce, were once prime suspects.
While reconstructing the days leading up to the girl’s disappearance, Tracy is brought into an active investigation with former partner Kinsington Rowe. A young woman has vanished on an isolated jogging trail in North Seattle. Divided between two critical cases, Tracy has little to go on except the treacherous deceptions behind a broken marriage—and now, the secrets hiding behind the closed doors of a deceptively quiet middle-class neighborhood.
To find two missing persons, Tracy will have to follow more than clues, which are both long cold and unsettlingly fresh. Given her own traumatic past, Tracy must also follow her instincts—to whatever dark and dangerous places they may lead.
My review:  I am a huge fan of the Tracy Crosswhite series by Robert Dugoni. As In Her Tracks makes clear,  Detective Tracy Crosswhite worked hard for every promotion and award. No one smoothed her way but she's proven herself many times over and won the respect of her colleagues. She's not free from the intrigue and politics that permeates the workplace. Certainly, her police chief takes great pleasure in making her life difficult.  This latest time is particularly bad. Tracy  returns from a leave of absence to find another woman has been given her slot in Serious Crimes and been assigned to her partner.  Tracy can take a lateral move to Cold Cases where she would work alone and be subject to greater emotional distress or she can retire.  And she's given the day to decide.
Cold Cases had been managed by one officer and he cared deeply about the victims. He appeals to Tracy's empathy with the victims and their families.  Though Tracy expects that Cold Cases will be difficult emotionally, she takes it on.
Soon, her old partner asks for her help with an active case -- a young woman has been abducted and might still be alive.  Tracy investigates but under the cover of her cold cases.  As she zeroes in on a suspicious family, she searches for dark secrets and another young woman who went missing.
Dugoni delivers another suspenseful and satisfying mystery in In Her Tracks. We are drawn into Tracy's struggle but even the antagonists are human.  In Her Tracks gives us a well developed, character driven mystery.  I read straight through the night and am looking forward to finding out what is next in Tracy Crosswhite's life.
About the Author:  Robert Dugoni is the critically acclaimed New York Times, Wall Street Journal, and Amazon bestselling author of the Tracy Crosswhite series, which has sold more than six million books worldwide; the David Sloane series; the Charles Jenkins series; the stand-alone novels The 7th Canon, Damage Control, and The Extraordinary Life of Sam Hell, for which he won an AudioFile Earphones Award for narration; and the nonfiction exposé The Cyanide Canary, a Washington Post best book of the year. He is the recipient of the Nancy Pearl Book Award for fiction and has twice won the Friends of Mystery Spotted Owl Award for best novel. He is a two-time finalist for the International Thriller Awards and a finalist for the Harper Lee Prize for Legal Fiction, the Silver Falchion Award for mystery, and the Mystery Writers of America Edgar Awards. His books are sold in more than twenty-five countries and have been translated into more than two dozen languages. Visit his website at www.robertdugonibooks.com.
Posted by Gaby317 at 12:30 PM