The Mermaid from Jeju by Sumi Hahn 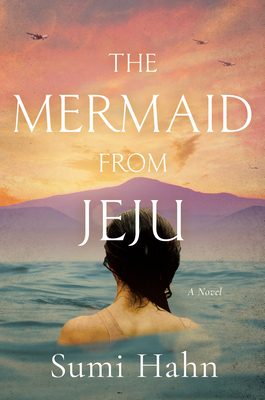 The Mermaid from Jeju by Sumi Hahn
ISBN-13 : 978-1643854403 - Hardcover $26.99
Publisher : Alcove Press (December 8, 2020).
Review copy provided by the publisher and NetGalley.
About the book: In the aftermath of World War II, Goh Junja is a girl just coming into her own. She is the latest successful deep sea diver in a family of strong haenyeo. Confident she is a woman now, Junja urges her mother to allow her to make the Goh family's annual trip to Mt. Halla, where they trade abalone and other sea delicacies for pork. Junja, a sea village girl, has never been to the mountains, where it smells like mushrooms and earth. While there, she falls in love with a mountain boy Yang Suwol, who rescues her after a particularly harrowing journey. But when Junja returns one day later, it is just in time to see her mother take her last breath, beaten by the waves during a dive she was taking in Junja's place.
Spiraling in grief, Junja sees her younger siblings sent to live with their estranged father. Everywhere she turns, Junja is haunted by the loss of her mother, from the meticulously tended herb garden that has now begun to sprout weeds, to the field where their bed sheets are beaten. She has only her grandmother and herself. But the world moves on without Junja.
The political climate is perilous. Still reeling from Japan's forced withdrawal from the peninsula, Korea is forced to accommodate the rapid establishment of US troops. Junja's canny grandmother, who lived through the Japanese invasion that led to Korea's occupation understands the signs of danger all too well. When Suwol is arrested for working with and harboring communists, and the perils of post-WWII overtake her homelands, Junja must learn to navigate a tumultuous world unlike anything she's ever known.
My review: Sumi Hahn's The Mermaid from Jeju captivated me from the start. I didn't know much about the Japanese invasion of Korea or the Korean war before reading this book. In The Mermaid of Jeju, we learn the story of Junja Goh at the end of her life in America. Her husband and two daughters are mourning her, preparing her funeral. Her husband has started to dream of ghosts and as he tries to calm his life, he decides to return to South Korea and Jeju Island.
The novel switches from the present to the past and we learn Junja's story as a young girl. She is the eldest daughter and a powerful swimmer, one of the famous divers of Jeju Island. She learned this skill from her grandmother and mother - women equally famous and well respected for their strength and skill. Junja has been sent on an errand to deliver live abalone to a family in the mountains. The trip is long, difficult and exhausting and Junja travels on foot with the burden on her back. She meets Suwol, the firstborn son of the house, during this trip and he becomes an important part of her story.
We learn of the violence and cruelty of the different occupiers of Jeju Island - from the Japanese to the Americans and the Mainlanders. As we learn of the difficulties that Junja and her family have gone through, we get a sense of the difficulties the South Korean people had to endure. The Mermaid from Jeju is told with humor, sympathy and beautiful prose.
#MermaidfromJeju #NetGalley
About the Author:  Sumi Hahn was born in Korea and immigrated to the United States when she was a year old. A former English teacher, she got her Bachelor's in English literature from Harvard University and her Master's from UC Berkeley. She was a columnist for the Times Picayune in New Orleans and has written on food and music for various publications in Seattle. Sumi and her family now live in New Zealand but divide their time between Korea and New Zealand. The Mermaid from Jeju is her first novel.
Posted by Gaby317 at 10:22 AM