Welcome to the second day of Meggie's Remains Virtual Book Tour courtesy of Pump Up Your Book Promotion. 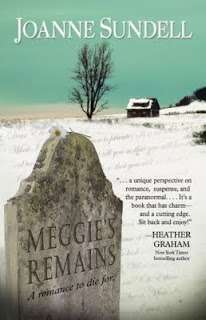 Meggie's Remains is set in 1874 in what was then known as Colorado Territory. The novel opens in Denver, which had been largely organized by and centered around gold seekers, miners, and railroads. The West was in the process of "being tamed" and while truces were being negotiated there were hints of the atrocities to follow. Colorado was still rough territory and very few women traveled there alone.

Meggie's trip came out of desperation and fear - she's clearly run away from someone and needs to stay hidden. She's suffered some sort of trauma and as she relives her nightmare, Meggie is found hallucinating on the street. Ethan Rourke comes across the disheveled and incoherent Meggie. Moved to pity, he helps her to the main hotel and quietly settles her bill. He doesn't expect to come across her again.

Nearly out of funds, Meggie takes a teaching post in a small town outside of Denver. Meggie's past experience keeps her wary of men and afraid of romance, but the welcome from her students and their families helps Meggie build a life for herself. All seems to be going well until Meggie's past catches up with her. Her possible rescuer, Ethan Rourke, is facing dangers of his own.

In Meggie's Remains, the location is a character in the novel. Joanne Sundell describes the Wild West with details and research, giving the novel a certain richness. I found the characters of Ethan Rourke and Meggie McMurphy are fleshed out and interesting, although I did not enjoy the earlier passages that depicted Meggie's point of view. Meggie's hallucinations and instability made her an unsympathetic character and it took her relocation to the small town and the revelation of her past before I began to care about her. On the whole, Meggie McMurphy is an unusual herione and Meggie's Remains is an interesting and enjoyable read.I would recommend it to people who enjoy Westerns, romances and suspense novels.

Thank you so much, Dorothy, Pump Up Your Book Promotion and Joanne Sundell for this opportunity!
Posted by Gaby317 at 10:51 AM