Tosca at the Metropolitan Opera opens on September 21 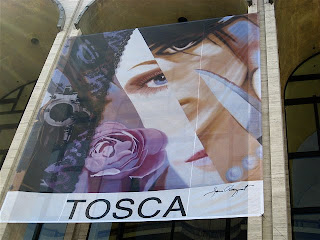 Tosca opens at the Metropolitan Opera this September 21. I was lucky enough to watch the free dress rehearsal last Thursday morning. R & I had orchestra seats and thoroughly enjoyed the whole experience. This relatively new tradition of opening dress rehearsals to the public is part of the Met's commitment to bring "opera to the people" and was underwritten by Agnes Varis and Karl Leichtman.
These cultural institutions, such as the Metropolitan Opera, the MOMA, the Metropolitan Museum, the Guggenheim, created largely through private donations are another amazing aspect of New York. 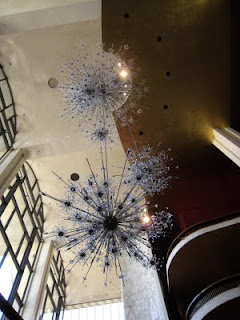 Each detail of the Met seems well thought out and carefully executed, from the art and architectural details to each seat's screen with subtitles (even the foot pedals to flush the toilets). The Met reflects what excellent taste and money can create. I am grateful for the Open House that make this New York experience available to everyone.
The production itself was amazing. I'd posted a summary of Tosca earlier this week, but here's a quick recap:
Rome, 1800. Painter Mario Cavaradossi is working on a portrait of Mary Magdelene who has a close likeness of Marchessa Attavanti, a blonde woman who he has never met. Cesare Angelotti, an escaped political prisoner, who has hidden in the chapel makes himself known to his friend Cavaradossi. Cavaradossi offers to help Angelotti escape. Tosca, the painter's girl friend interrupts them. As the prisoner hides, Tosca jealously confronts the painter, accusing him of hiding a lover and seeing the painting wonders if he is in love with Marchessa Attaventi. They all depart, but agree to meet at the chapel after Tosca's performance that evening. The head of the secret police, Baron Scarpa, reaches the chapel after Angelotti and Cavaradossi have left. Scarpa suspects that the painter has helped the political prisoner, Scarpa comes up with a plan. Feeding Tosca's jealousy by claiming to have found the Marchessa Attavanti's fan among the painter's things, Scarpa then has his men follow Tosca to the painter's hideaway....
I'm not familiar with Puccini and opera music, but I found the show beautiful. The way that the music revealed the personalities and state of mind of each of the characters as they appeared, the characters first appeared had me grinning in my seat. It began with the fear and desperation that Angelotti felt as he ran to the chapel and hid, then shifted to show the priest's cheerfulness as he got the chapel ready for the day. And it just kept getting better and better. 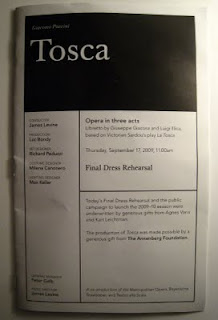 Director - Luc Bondy
Conductor - James Levine
Angelotti - David Pittsinger
Cavaradossi - Marcelo Alvarez
Tosca - Karita Mattila
Scarpia - George Gagnidze
The show itself is roughly 3 hours and 3 minutes, but there were intermissions of 40 minutes and 30 minutes. The time went by so quickly. During tense and critical moments of the story, I kept expecting that Cavaradossi and Tosca to get caught - as would happen in a novel, movie or play. But since opera is altogether different, the characters had the chance to express their thoughts and feelings to the audience. The talent and performance was amazing. A friend who watched the dress rehearsal decided that she wanted to watch more opera. I feel much the same way and am thankful for these Open Houses.
Tosca was the first of three Open Houses, but the final dress rehearsals for Les Contes d'Hoffmann and Armida will be open as well. The Met website will post the details. Once I find out about the next dress rehearsals, I'll post about them as well. If you're interested in watching the dress rehearsals but not able to line up for tickets, the dress rehearsals are also shown on huge screens in Times Square and the Lincoln Center Plaza. 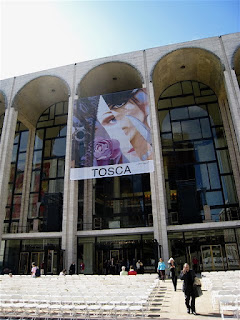