"When the hole started opening two years ago, Lisa and I congratulated ourselves because at least we weren't in one of those La Brea Tar Pit adjustable-rate home loans. We had a normal thirty-year, with a normal fixed rate, and even though we'd unwisely cashed in equity for a couple of costly remodels, we were still okay. We had some normal debt; normal credit cards, normal furniture layaways, normal car payments, some uncovered medical bills, Teddy's normal braces and Franklin's normal speech therapy (Oh, for God's sake, say your 'R's'). But then my perfectly normal dream of starting my own business, the afore-derided poetfolio.com, turned out to take longer and be more costly than we thought, and we found ourselves taking another line of credit on the house, going deeper in debt. Then came Lisa's abnormal online shopping binge, and our credit cards rolled over on us a couple of times and the car payments lapsed and the ground began slipping away and the only thing that seemed rock steady was the house, so we took another chunk out of it, just to catch up, we said, to temporarily cover living expenses, and we refinanced at the peak value; like a snake eating its tail we borrowed against our house to pay the house payment of a house leveraged at forty percent more than the house was worth. When the dip came I scrambled back to the newspaper, but with the hole growing deeper and the monthly interest charges eating us alive, we fell further behind, missed a few house payments and our helpful mortgage lender offered us an "agreement of forebearance," six months away (with interest!) to get on top of our payments, and we jumped at that lifeline, but then I lost my job and maybe we were distracted by that and by my father's collapse (we dragged him into the hole with us) because while we fretted and waffled and stalled, the stock market went out for milk, got stoned and lost forty percent of its value, depleting my 401(k), which, due to my stubborn love for financial and media stocks, had already begun to look more like a 4(k). ...This is how a person wakes up one morning to find that he's six days from losing his house."
-The Financial Lives of the Poets by Jess Walter

Synopsis:
Successful throughout his life, Matt Prior finds himself in the unexpected position of being unemployed, deeply in debt and weeks away from losing his home. Things have been difficult at home and he can't bare to tell his wife the true state of their finances. Matt continues with the everyday life - caring for the children, applying for jobs, negotiating with their mortgage lender, and the usual household chores. When one late night, Matt discovers a possible solution - wacky and dangerous though it may be - to solve their financial hell, he decides to give it a go.

Review: In Jess Walter's The Financial Lives of the Poets, Matt Prior goes on a hilarious and absurd adventure triggered by today's financial crisis. Matt has his own crooked logic that will leave you chuckling, whether he's plotting ways to sabotage his wife's flirtation with her high school boyfriend or eke revenge against M_ who laid him or finding ways to reassure his father during his slow descent to senility. A fun and crazy ride - highly recommended! 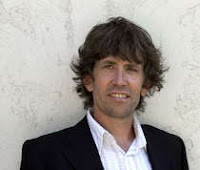 About the Author, courtesy of his website:
Jess Walter is the author of five novels and one nonfiction book. His work has been translated into more than 20 languages and his essays, short fiction, criticism and journalism have been widely published, in Details, Playboy, Newsweek, the Washington Post, the Los Angeles Times, the Boston Globe among many others. Learn more on Jess Walter's website at http://www.jesswalter.com/index.htm


Book Tour Events in your area:

November 18 -- LEAVENWORTH, WA, A Book for All Seasons

Thanks so much to Jess Walter, Trish and TLC Book Tours for this opportunity!
Posted by Gaby317 at 8:53 AM

Email ThisBlogThis!Share to TwitterShare to FacebookShare to Pinterest
Labels: The Financial Lives of the Poets by Jess Walter, TLC Book Tours