A Golden Grave by Erin Lindsey 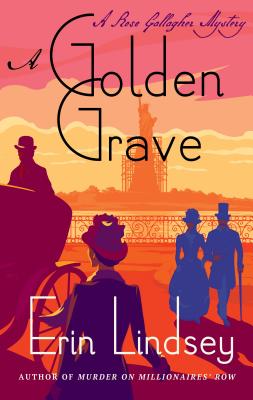 A Golden Grave by Erin Lindsey
ISBN-10 : 1250180678  - Paperback $17.99
Publisher : Minotaur Books (September 17, 2019), 400 pages.
Review copy courtesy of Minotaur Books and NetGalley.
The blurb: Rose Gallagher always dreamed of finding adventure, so her new life as a freshly-minted Pinkerton agent ought to be everything she ever wanted. Only a few months ago, she was just another poor Irish housemaid from Five Points; now, she’s learning to shoot a gun and dance the waltz and throw a grown man over her shoulder. Better still, she’s been recruited to the special branch, an elite unit dedicated to cases of a paranormal nature, and that means spending her days alongside the dashing Thomas Wiltshire.
But being a Pinkerton isn’t quite what Rose imagined, and not everyone welcomes her into the fold. Meanwhile, her old friends aren’t sure what to make of the new Rose, and even Thomas seems to be having second thoughts about his junior partner. So when a chilling new case arrives on Rose’s doorstep, she jumps at the chance to prove herself – only to realize that the stakes are higher than she could have imagined. Six delegates have been murdered at a local political convention, and the police have no idea who–or what–is responsible. One thing seems clear: The killer’s next target is a candidate for New York City mayor, one Theodore Roosevelt.Convinced that something supernatural is afoot, Rose and Thomas must track down the murderer before Roosevelt is taken out of the race–permanently. But this killer is unlike any they’ve faced before, and hunting him down will take them from brownstones to ballrooms to Bowery saloons. Not quite comfortable anywhere, Rose must come to terms with her own changed place in society–and the fact that some would do anything to see her gone from it entirely.
My review:  New York City during the Gilded Age has always fascinated me, so I've enjoyed reading Erin Lindsey's Rose Gallagher mysteries with fantasy.  In the 2nd installment,  A Golden Grave, Rose Gallagher is no longer the housemaid but living in the regular quarters of Thomas Wiltshire's Fifth Avenue townhouse.  Rose is in training as a member of the Pinkerton Agency's Special Branch and works alongside her former employer Thomas Wiltshire.  The Special Branch deals with supernatural powers and Rose Gallagher's special skills are critical to their investigations.
When Erin Lindsey takes us to New York City's Gilded Age, she doesn't hold back. We visit private clubs, meet with Teddy Roosevelt as a young man and candidate for Mayor of New York City.  Though only about 1% of the population has "luck"/supernatural powers, this special gift is prevalent among the wealthiest citizens.  When multiple deaths of Roosevelt's supporters occur during a political convention, Rose, Thomas and their team must determine whether a new form of luck is involved and how to find those that wield power.  It takes ingenuity, courage and special sleuthing but A Golden Grave is an adventure worth following!
About the Author: ERIN LINDSEY has lived and worked in dozens of countries around the world, but has only ever called two places home: her native city of Calgary and her adopted hometown of New York. In addition to the Rose Gallagher mysteries, she is the author of the Bloodbound series of fantasy novels from Ace. She divides her time between Calgary and Brooklyn with her husband and a pair of half-domesticated cats.
Posted by Gaby317 at 11:12 AM