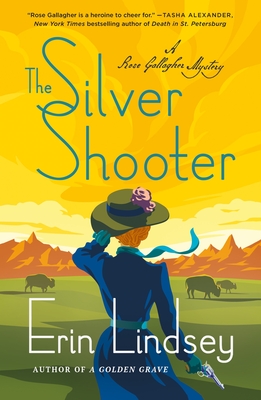 The Silver Shooter (3rd of 3 in the Rose Gallagher series) by Erin Lindsey
ISBN-10 : 1250623448 - Paperback $17.99
Publisher : Minotaur Books (November 17, 2020), 352 pages.
Review copy courtesy of Minotaur Books and NetGalley.
The blurb: It's the spring of 1887, and Rose Gallagher is finally coming into her own. She's the proud owner of a lovely little home near Washington Square, where she lives with her mother and friend Pietro, and she's making a name for herself as a Pinkerton agent with a specialty in things . . . otherworldly. She and her partner Thomas are working together better than ever, and mostly managing to push aside romantic feelings for one another. Mostly.
Things are almost too good to be true―so Rose is hardly surprised when Theodore Roosevelt descends on them like a storm cloud, hiring them for a mysterious job out west. A series of strange occurrences in the Badlands surrounding his ranch has Roosevelt convinced something supernatural is afoot.It began with livestock disappearing from the range, their bodies later discovered torn apart by something monstrously powerful. Now people are dying, too. Meanwhile, a successful prospector has gone missing, and rumors about his lost stash of gold have attracted treasure hunters from far and wide – but they keep disappearing, too. To top it all off, this past winter, a mysterious weather phenomenon devastated the land, leaving the locals hungry, broke, and looking for someone to blame.With tensions mounting and the body count rising, Roosevelt fears a single spark will be all it takes to set the Badlands aflame. It’s up to Rose and Thomas to get to the bottom of it, but they’re against the clock and an unknown enemy, and the west will prove wilder than they could possibly imagine…
My review:  New York City during the Gilded Age has always fascinated me, so I've enjoyed reading Erin Lindsey's Rose Gallagher mysteries with fantasy.  Aside from supernatural phenomena, in Lindsey's world there is the concept of "luck".   Though only about 1% of the population has "luck"/supernatural powers, this special gift is prevalent among the wealthiest citizens.  In this 3nd installment,  The Silver Shooter, Rose Gallagher is further from her role as former housemaid and comfortable in her position as Pinkerton partner to her former employer the dashing and wealthy Thomas Wiltshire of Fifth Avenue/England.  Rose and Thomas work in the Pinkerton Agency's Special Branch and are hired to deal with supernatural problems/phenomena.  Rose Gallagher's special skills in identifying and dealing with the dead are critical to their investigations.
When Erin Lindsey takes us to New York City's Gilded Age, she doesn't hold back. In the previous book, Rose and Thomas worked to save Teddy Roosevelt's life during his unsuccessful run for mayor.   Roosevelt has luck in the form of his unusual charisma and a physical draw that he has on people.  This time, Teddy Roosevelt is back and has requested their help to deal with strange and large scale deaths of cattle in the Badlands.
I like the characters and Gilded Age New York as Erin Lindsey paints it.  Lindsey gives us a diverse city with ethnic neighborhoods but there is respect for the different cultures and what the Asians ("Celestials") and other new immigrants (Italian, Irish, etc) face.  I like how Rose mingles and befriends people from the different communities from Chinese Mei and her father Wang to African American Clara and her family's longtime Italian tenant Pietro.  In Lindsey's New York the differences exist without animosity, racism or cruelty.
As an aside, I've read books that proclaim their historical or cultural authenticity with open displays of prejudice.  Sure, the character may think and say "chink" or "gook"  but I don't have to spend time in that world with that character.  Even if I was getting into the book, the "chink" is enough to stop the suspension of disbelief and set me looking for something else to read. Rose Gallagher's books have the opposite reaction -- they are a sort of celebration of hope and it comes across clearly.
In The Silver Shooter, we go beyond New York City to the Dakotas on the request of Teddy Roosevelt. Before leaving, Rose and Thomas approach Tesla to ask if he has any inventions that will help them identify "luck".  Telsa's abilities as an inventor are magnified by his "luck" working with electricity and inventiveness.  The appearance of historical figures in the narrative are a wink to the reader and much appreciated.
But the real problem that Rose and Thomas face is finding the cause of deaths of cattle and men in the Dakotas.  The destruction, thievery, loss of horses and cattle has increased the tensions between the ranchers and the Native Americans. The few Native Americans in the area have already been forced out of their land and homes but are in danger of being destroyed by the US Army on the request of powerful ranchers.  Thomas and their team must determine what is causing the attacks and find a way to solve the problem before the loss of another innocent life.  Rose, Thomas and their friends from New York's Fifth Avenue set risk life and limb.  In The Silver Spoon, Erin Lindsey delivers another fun, engrossing read!
About the Author: ERIN LINDSEY has lived and worked in dozens of countries around the world, but has only ever called two places home: her native city of Calgary and her adopted hometown of New York. In addition to the Rose Gallagher mysteries, she is the author of the Bloodbound series of fantasy novels from Ace. She divides her time between Calgary and Brooklyn with her husband and a pair of half-domesticated cats.
Posted by Gaby317 at 3:15 PM