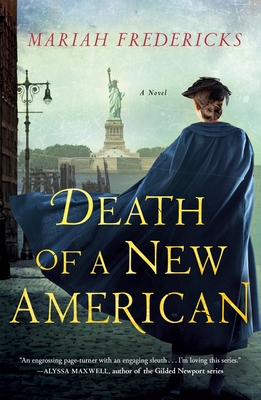 Death of a New American (A Jane Prescott mystery) by Mariah Fredericks
ISBN-10 : 1250252350 - Paperback $11.99
Publisher : Minotaur; Reprint Edition (March 17, 2020), 320 pages.
Review copy courtesy of Minotaur Books and NetGalley.
The blurb: In 1912, as New York reels from the news of the Titanic disaster, ladies’ maid Jane Prescott travels to Long Island with the Benchley family. Their daughter Louise is to marry William Tyler, at their uncle and aunt’s mansion; the Tylers are a glamorous, storied couple, their past filled with travel and adventure. Now, Charles Tyler is known for putting down New York’s notorious Italian mafia, the Black Hand, and his wife Alva has settled into domestic life.

As the city visitors adjust to the rhythms of the household, and plan Louise’s upcoming wedding, Jane quickly befriends the Tyler children’s nanny, Sofia―a young Italian-American woman. However, one unusually sultry spring night, Jane is woken by a scream from the nursery―and rushes in to find Sofia murdered, and the carefully locked window flung open.

The Tylers believe that this is an attempted kidnapping of their baby gone wrong; a warning from the criminal underworld to Charles Tyler. But Jane is asked to help with the investigation by her friend, journalist Michael Behan, who knows that she is uniquely placed to see what other tensions may simmer just below the surface in this wealthy, secretive household. Was Sofia’s murder fall-out from the social tensions rife in New York, or could it be a much more personal crime?

My review:  I'm always up for a mystery and I'm delighted with Mariah Fredericks' Jane Prescott series. In Jane Prescott we get a close look into the lives of Fifth Avenue society during the Gilded Age. Jane works as lady's maid to Charlotte Benchley, the daughter of a wealthy inventor. The Benchleys have nearly unlimited wealth but need the help of tastemakers to navigate society. Jane's previous employer had been related to everyone in society either by birth or marriage. Jane's education, intelligence and discretion have won her the friendship and appreciation of her employers and their friends. So, when a suspicious death occurs, Jane wants to clear suspicion from people that she cares about. Her investigations take her upstairs and downstairs in Fifth Avenue mansions. It is a delight to follow Jane Prescott into the homes and streets of New York during the Gilded Age in Death of a New American.
About the Author: MARIAH FREDERICKS was born and raised in New York City, where she still lives with her family. She is the author of several YA novels. Death of a New American is her second novel to feature ladies’ maid Jane Prescott.
Posted by Gaby317 at 8:39 AM