Groundswell at The New Group

Groundswell at The New Group until June 27
Synopsis courtesy of The New Group:
On the barren, diamond-diving coast of South Africa, Johan and Thami, an ex-cop and a gardener from starkly contrasting backgrounds, maintain a beachfront guest lodge during the off-season while looking for a way out. When Smith, a retired businessman, shows up one foggy night, the two men think they've found an ideal investor for their scheme to buy into a government-run diamond concession. Soon, these rootless men find themselves in a power struggle fueled by greed, desperation and entitlement. GROUNDSWELL is a psychological thriller about hunger and hope and the glittering promises of a transforming society.

Review:
We felt fortunate to have stumbled across the production of Groundswell at the New Group. We hadn't known what to expect. The play opens with Thami writing to his family when Johan enters sopping wet and loud. As Johan convinces Thami that they should approach the guest, Smith, for capital to enable them to invest in a government-run diamond concession, I had the first twinges of unease.

The performances at dinner and as each character relayed their past and point of view that I had a sense of the power of the language and the acting. As Smith stated that he owed no one compensation for the life that he'd lived, an older viewer in the second row quite loudly exclaimed, "Bravo!" The rest of the audience would have let him off, but he would punctuate Smith's statements with further grunts and noises of assent. It's a very small theater, the man was eventually shushed. In time to allow each of the other characters a chance to say their piece.

Groundswell is an excellent show and well worth seeing. It's among my new favorites. 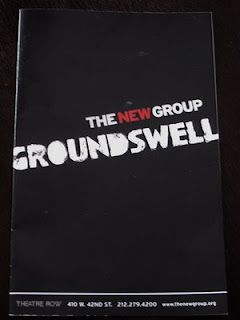 To learn more about The New Group (410 W. 42nd St, between 9th and 10th Avenues) and this production, click here or visit

To read the NY Times review of Groundswell, click here or visit
http://theater2.nytimes.com/2009/05/19/theater/reviews/19grou.html 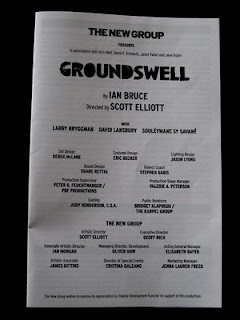