Twelfth Night, Or What You Will at Shakespeare in the Park 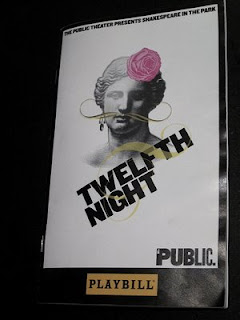 There are moments that I am so happy to live in NYC. I used to find the "only in NY" comments, whether overly positive or negative, a bit much.   After all, there are plenty of places in the world where strange things happen and wonderful events take place.  But as we headed from Central Park into a crowded subway, I couldn't help but be amazed at the quality of free theater in NYC.
You guessed it, the new season of Shakespeare in the Park  at the Delacorte Theater in Central Park.  It began last week and we were lucky enough to snag tickets to Twelfth Night through the virtual line.  More on the virtual line and ways to get free tickets in a bit...
If you can, you should really watch this production! 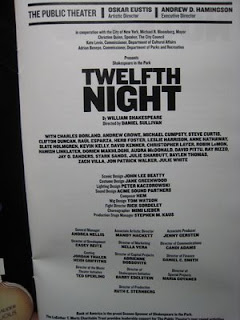 Twelfth Night is a light, fun comedy that even kids will understand and enjoy.  Here's the synopsis, as listed in the Playbill:
Orsino, Duke of Illyria, pines for Countess Olivia.  Shipwrecked Viola grieves for her lost twin brother, Sebastian. Olivia mourns her own dead brother and father.
Alone and uncertain, Viola decides to disguise herself as a boy, rename herself Cesario, and enter the service of the handsome Orsino.
The Duke dispatches his new page to win over his love Olivia, but the Countess wants none of it.  She discovers to her own surprise that she fancies Orsino's new messenger.  Viola comes to realize Olivia's love for her disguise, and as Olivia's passion for Cesario/Viola grows, so Viola's love grows for Orsino.
Meanwhile, Olivia's dissolute and drunken uncle, Sir Toby Belch encourages his pal Sir Andrew Aguecheek to woe Olivia, even as he bilks the dimwitted knight of his money.  Together with Olivia's chambermaid Maria and the household jester Feste, the two knights get in big trouble with Olivia's steward, the officious Malvolio.  Bent on revenge, they devise a plan to make the steward believe that Olivia is in love with him.  Malvolio buys it, and when he approaches Olivia as her new love, Toby and his crew lock him up.
Unbeknownst to Viola, her brother Sebastian survived the shipwreck and has arrived in Illyria accompanied by the man who saved his life, the pirate Antonio.  Antonio pledges his devotion to Sebastian and vows to accompany him, despite being a wanted man in Illyria.
Sir Andrew observes Olivia's fondness for Cesario and gets jealous. Toby works Andrew into a frenzy and encourages him to challenge the page to a duel.  Antonio interrupts it, thinking the page is his friend Sebastian.  But Sebastian is actually with Olivia, who, head over heels for Cesario/Viola, has thrown herself at the identical young man.
Confusion escalates until Sebastian and Viola are reunited.  Orsino and Olivia find love in the arms of the delighted twins.  Antonio is pardoned, Toby and company contrite, and a celebration is planned.  Only Malvolio sounds a discordant note as he takes his leave of the happy group.
The performance maximized the humor in the play - and it was hilarious!  The girls next to us were guffawing throughout, in a good way.  I imagine that the original productions at Shakespeare's Globe theater were similar - people carrying wine and beer to their seats, the sense of joviality, the constant jokes by the buffoons in the play.  It seemed the perfect way to introduce Shakespeare or a play to those unfamiliar.  People like myself, since I haven't read Twelfth Night yet.   Perhaps if I had,  may have wished for greater time spent on Viola/Cesario,  Orsino, Olivia and Sebastian.   But to be honest, I wouldn't have changed a thing!  It was the best play I've seen at Shakespeare in the Park.  It's such a treat that it's free.   Even the mix of the audience is worth watching, quite a contrast from the folks you see out by Times Square and Broadway.
The  cast was terrific - Anne Hathaway played Viola/Cesario and carried it off so well.  Audra McDonald, who plays Naomi in Private Practice, was perfect as Countess Olivia.   Raul Esparza was also an excellent Duke Orsino.    I am certain that Jay Sanders (Sir Toby Belch), Hamish Linklater (Andrew Aguecheek), David Pittu (Feste), and Michael Cumpsty (Malvolio) and Julie White (Maria) will have you chuckling, if not guffawing in your seats. 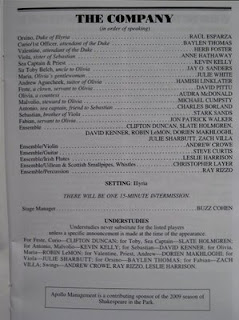 If you're in NYC or will be in the area, it's worth trying to get a pair of tickets.  You can either drop by one of the box offices on the day of the show after 1 pm or you can try the virtual line. The virtual line is open from midnight to 1 pm on the day of the show.  You request the tickets and then check back between 1 pm and 6 pm that same day to see if you've won tickets.   You can pick up your tickets 2 hours before the show and have to do so before 7:30 pm.  The extra and unused tickets are handed out to those on the wait list thirty minutes before the show begins.
To read the press release and learn more about the cast of Twelfth Night, click here or visit
http://www.publictheater.org/images/twelfth%20night%20second%20casting%20release%20final.pdf
Posted by Gaby317 at 9:33 PM